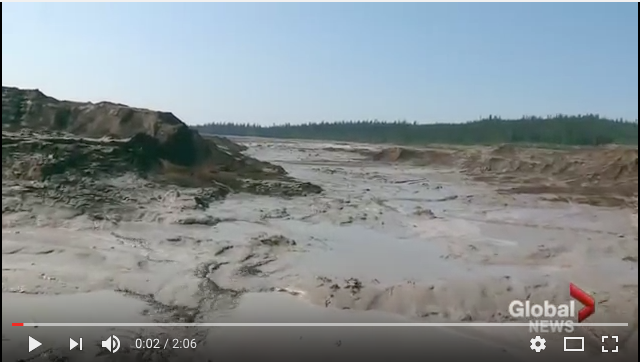 August 4th marks the 3-year anniversary of the Mt Polley Mine Disaster, the worst environmental mining disaster in B.C.’s history. That day, a massive earthen tailings dam broke from its foundations, releasing millions of liters of toxic mine tailings into nearby Quesnel Lake, a major tributary of the Frasier River, one of Canada’s most important salmon-producing rivers. The dam was less than 20 years old.

The Quesnel Lake watershed has long provided the communities of the Xat’sull First Nation and town of Likely with clean water and fish. The waters of the lake, the deepest fjord lake in North America, were pristine and off limits to dumping. Now, three years later, the First Nations community remains unable to eat the lake’s fish that has sustained them for thousands of years. There have also been significant losses to the once flourishing tourism industry which has seen no compensation. Because Quesnel Lake is no longer pristine, BC now allows mine water to be dumped there.

We know that it can be hard to filter the mass of information coming out of D.C. and Juneau and track which will have an impact on the Tongass. Here at SEACC, our goal is to keep you informed about what is going on and provide you opportunities to protect what you love, the Tongass National Forest and the Inside Passage.

Many of the current issues are ones that we have seen before such as the Alaska Mental Health Trust Lands or the Big Thorne timber sale. As your local watchdog nonprofit, SEACC will continue to keep you updated on these and other issues important for Southeast.

Want to do more? Contact SEACC to find out how you can host an event, volunteer, or attend events in your community.

State Shutdown and the Tongass

On July 1st the Alaska State Government will shut its doors if the Alaska Legislature does not reach a compromise on how to close the state’s budget gap. Although both the Governor and House have offered real plans, the Senate has sat on its hands and rejected all attempts to come up with new revenue sources. With no budget agreed to by this past Friday, Governor Walker was forced to open a second special session. With less than two weeks left, it’s time for the Senate and Senate President Pete Kelly, who leads the Senate Majority, to step up, do their job and pass a budget. Failure to do so would have a resounding impact on all sectors of the Alaskan economy and way of life.

Not in Juneau - Don't resurrect the AJ Mine

Proposed changes to the CBJ mining code could allow the AJ Mine to be built without adequate public participation. The CBJ Committee of the Whole is meeting tonight to discuss this issue. Please write to the CBJ Assembly, or come to the public meeting tonight, at Juneau’s City Hall.

March 30, 2017, celebrates the 150th anniversary of the transfer of Alaskan lands from Russian and the corporate interests of the Russian American Trading Company to the American republic. Nearly sixty years ago, the people of Alaska achieved statehood after wresting control from corporate interests like the salmon canneries based in the Lower 48, so we could manage this state’s amazing natural resources to protect our livelihoods and way of life for the long term.

Industry can pollute our water, why can't we protect it?

We are incredibly lucky here in Alaska. Over 99% of our water is of exceptional quality, providing for world class salmon runs and a thriving tourism industry.

Critical to keeping our water clean are the policies designed to protect it. Under the Clean Water Act (CWA), the Department of Environmental Conservation (DEC) is required to have an antidegradation policy and implementation plan to assure the continued health of our waters. Included in this is the process for designating Outstanding National Resource Waters (ONRW), also known as Tier 3 waters. Designating a body of water as a Tier 3 water means that it is of such exceptional quality that it must be permanently protected, unlike a Tier 2 designation, which allows for a certain amount of degradation.

On January 30th Rep Dan Ortiz introduced House Joint Resolution 9 (H.J.R. 9) – Canadian mines on Transboundary Rivers – to the Alaska State Legislature. This is a much-needed step in protecting our waters in Alaska from outside interests.

The resolution calls on the U.S. federal government to work with the Canadian federal government to investigate the long-term impacts that proposed mines could cause to our productive river systems: the Alsek, Taku, Stikine and Unuk. Although a Memorandum of Understanding is in place between Alaska and British Columbia, it is not enforceable and cannot require financial compensation to Alaska if a mining company goes bankrupt and fails to continue water treatment, as in the case of the Tulsequah Chief Mine.

In 2017, Alaska and the nation face an onslaught of new legislation from a Congress seeking to promote short-term economic gain for a few at the expense of the larger public good.

A bill of particular concern is H.R. 232, the State National Forest Management Act of 2017, introduced by Alaska Congressman Don Young. H.R. 232 would allow states to acquire up to 2 million acres of National Forest System lands, including all roads, campgrounds, and public-use cabins - including from the Tongass.

Donald Trump is right – the time for empty talk is over

Today, during the early hours of a beautiful, wintry Alaskan morning here in Juneau, Donald Trump was inaugurated as the 45th President of the United States.

After two months spent living, wrestling, and engaging with this stark new reality, it still felt surreal as I drove to work that on such a beautiful morning, our country could take this dramatic turn towards the unpredictable. And yet, here we are.

During the inauguration speech, Trump observed that “the time for empty talk is over," and that “now arrives the hour for action.” We couldn’t agree more.

This month has been a busy time for the Tongass – below please find updates on the Tongass Land Management Plan Amendment, new information about the Forest Service’s public comment period for planned projects on Prince of Wales (POW), and information on public input meetings taking place next week in Thorne Bay, Naukati, and Craig regarding the Prince of Wales Landscape Level Analysis Project (POWLLAP). We’d particularly like to make sure our members see and have the opportunity to attend and weigh in at the POW Landscape Level Analysis meeting next week: let us know if you decide to go or need more information!