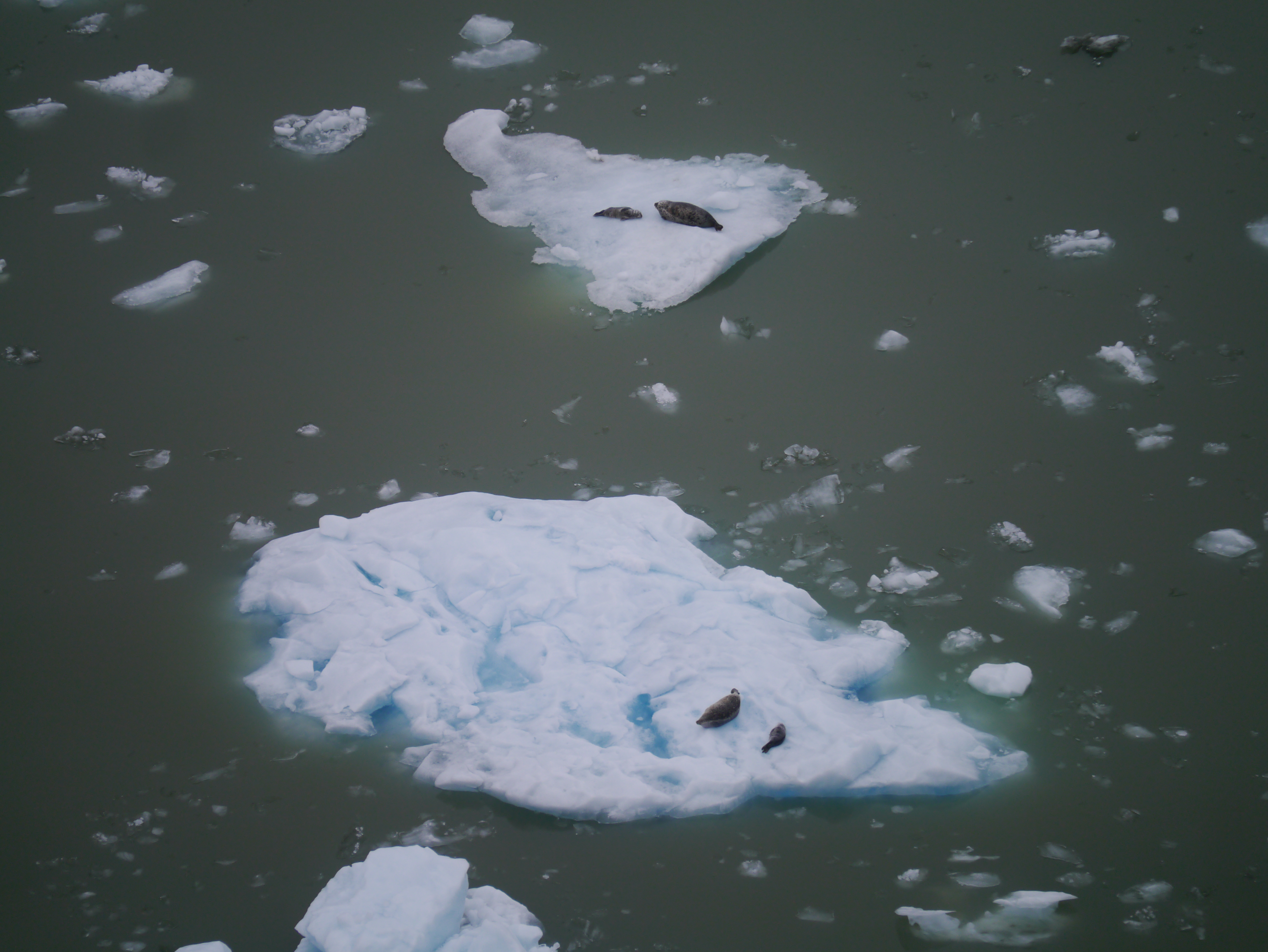 Sean and I huddle under a tarp, a few hundred feet up on a rocky bluff. South Sawyer Glacier squats opposite us, separated by a long stretch of silty green water. Below South Sawyer, a thick mat of brash ice stretches towards us, ending in a clearly demarcated line beyond which only larger bergs have dared to venture. We’re up here to count seals, but from what I can see, there’s only a few scattered on the flatter icebergs in front of us. Surely this couldn’t take that long. Sean, after a short squint, confidently asserts that there’s quite a lot of seals, but it’s hard to believe him. We set the binoculars up on sturdy tripods, and fuss for several minutes to find a position that will be comfortable for an hour or two. Sean gives me a final chance to make sure I’m ready and comfortable. I’m impatient, ready to finish this and move on to the next thing.

Then I look into the binoculars. Suddenly the distance between us and the glacier stretches on and on. The solid white field of sea ice opens up, becomes a plain of three-dimensional shapes. I spot a seal! And another! And another. Seals, and farther back, seal-like objects, seal colored dots, and so on, beyond resolution. I feel much less confident.

Harbor seals, Phoca Vitulina, stream in from the surrounding area to give birth here. Although harbor seals don’t care for ice as much as their northward relatives, icebergs present a perfect birthing spot: isolated from predators, not affected by tide, and easy to abandon if a threat presents itself. It also presents us with an excellent opportunity to assess a significant portion of Southeast Alaska’s population. Harbor Seals aren’t an endangered species, but the population has experienced declines in some parts of the state, and the cause isn’t clear. Resource competition with commercial fishing has reduced key prey species. Warming waters have proved a boon to red tide and infectious diseases. Pollution has infiltrated their food chain, making them less resilient overall. By counting the seals here, we can assess the health of the greater ecosystem these seals take part in. Sean warns me that after the cataclysmic glacial retreat in 2016, South Sawyer now sits so far back that our perch, used for decades of seal counting, is butting firmly against retirement. Where the seals used to perch on bergs practically underneath us, now the best flotsam is nearly a mile distant and much more widespread. Sean eyes a tiny island, newly exposed, as the next potential lookout.

We start at looker’s right, binoculars firmly planted on tripods, ready to pan and tilt as we go. We count separately. If we can come within a ten percent margin of each other, then we can write the numbers down and go. If not, we’re stuck sitting in the rain for another round. I have three counters; one is for adults basking on the ice, another for basking pups, the third for adults swimming among the bergs. Pups in the water are to be counted in one’s head while each adult seal gets a click.

Click. Click-click. Click. Doubts and errors start racking up, magnifying on top of one another. Did I count that seal on the left? Did I pan the binoculars too far, missing a pair, or not far enough, double-counting the same group? Is that a pup, or a rock? All the while, the ice is drifting left and right, fast and slow, subject to unseen influences. Thirty minutes in and I’m hopelessly lost. At this point, I feel like the guy wheezing up to the finish line in dead last. It’s become a personal thing. I move to tilt the binoculars and accidentally jog the whole thing. Resigned dread sets in. I try to find where I left off, but it’s a kaleidoscope of bergs and seals, rearranged endlessly. I have to tell Sean, as now I’ve lost any hope of validating his count. I am so, so sorry, Sean. 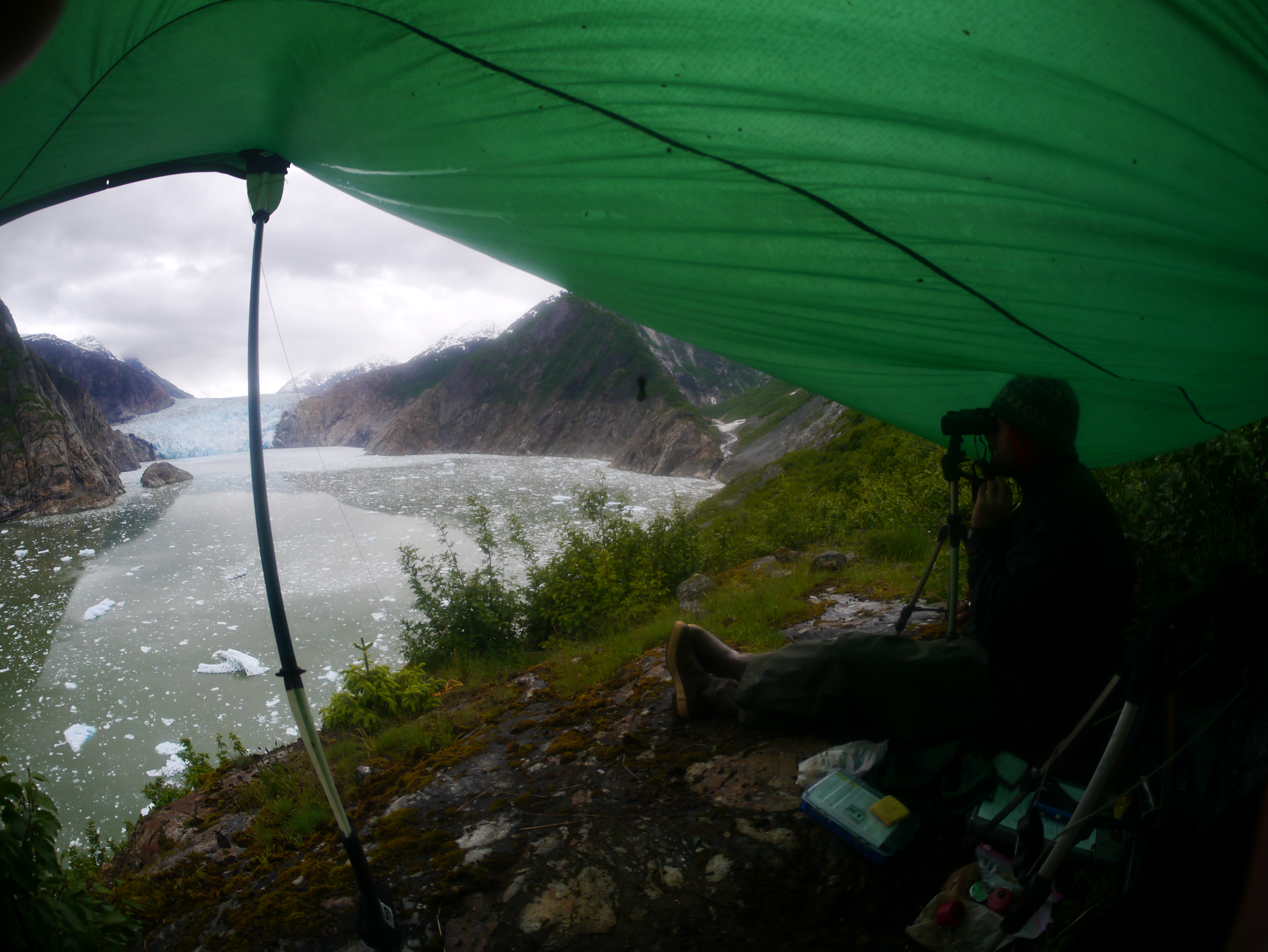 Counting seals under our shelter

We restart. Click-click. Click-click. Time no longer has meaning. I count what might be dust motes on the lens. I click the same seal three times. At some point, I wake up from the trance and there’s no more area left to cover. It’s over. Sean asks what my numbers are. It feels perverse, a taunt, a brief moment in which he grasps how utterly I’ve failed to count seals while I still have a sliver of hope. I let the accumulated effort of the past hour hang between us in the air, naked, vulnerable. X adult seals, Y baby seals, Z adults in the water. No baby seals in the water. His face is a cross between amused and resigned. One thousand and nine. I wonder for a second if he’s making a joke. Maybe I need to get my lens prescription checked. Somewhere out there hide over 200 extra seals beyond my count.  He pulls from what must be a superhuman reserve of patience and politely cuts me out of the counting. Steadying himself, Sean starts counting the entire bay again to hold against his first count. I wonder why he didn’t do that in the first place.

As he counts, I fidget, taking pictures, writing in my journal, brushing mountain goat pellets off my rain pants. I focus the binoculars on a charter boat threading the icebergs beneath us. Tiny passengers cluster against the far rail, taking in the majesty of the glacier. The cameras all swing to one seal at a time. They can detect seals in an impossibly tiny radius around the boat, unaware that they sit on the edge of hundreds and hundreds. Sean takes a break, radios the captain. He and the captain talk easily; they’ve known each other for several summers now. I watch as Sean’s conversation gradually dissipates from the captain to the naturalists to the passengers. They look out over the ice with new eyes. Seeing the forest now instead of the trees, so to speak. On the near side of the deck, facing away from the glacier, one tiny figure trains his binoculars up the cliff. I watch through mine as he searches, see the moment he finds us, tucked in at the edge of the alders, a tiny flap of forest green tarp that must just barely stick out. He jostles his friends around him, waves up, binoculars still in hand. I wave back, jostling the binoculars. I have no idea if he see’s me, seeing him.

The next week, Chrissie and I return to Tracy Arm. Bergs stream out from South Sawyer, too thick to navigate even by kayak. We make camp on Sawyer Island, an ovular mass of rock that sits just beyond where Sean and I counted. As we nestle into our tent, I hear the call of a seal pup nearby. Compared to the previous week, the sound of just this one is forlorn. I peek out from the tent, see one small pup swimming from berg to berg, calling out for its mother. There’s not another seal around. Harbor seals wean their babies for only four weeks, what seems a cruelly short time from their first breath on a frigid berg to a mostly solitary life. I don’t know enough to tell how old this pup is. Is it ready to survive on its own? It cries, again and again, a pitiful, almost human sound. There’s no answer, no trace of the other thousand seals. One pup, a blip, well within the margin of error if it never makes it out of the fjord. But as I sink back into my sleeping bag, it haunts me. Good luck, one-of-one-thousand.