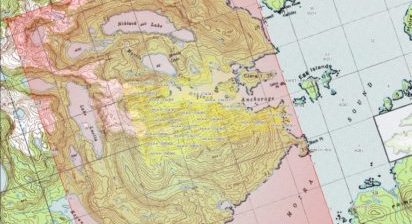 ADEC Remands Niblack Project Wastewater Discharge Permit Back for Review
Based on SEACC’s request for an informal review, the Niblack Alaska Pollution Discharge Elimination System (APDES) permit has been remanded to the permit writers by the director of the Division of Water at the Alaska Department of Environmental Conservation (ADEC) — a win for water quality and fish habitat!

JUNEAU (Áakʼw Ḵwáan Territory) — Alaska Department of Environmental Conservation (ADEC) announced its decision on Monday to remand a wastewater discharge permit issued on April 28, 2022, to Blackwolf Copper and Gold LTD for the Niblack Project back to the Division of Water to fix important issues raised by the public — a win for water quality! The Niblack Project is a copper-gold-zinc-silver mine exploration project located on Moira Sound on Prince of Wales Island approximately 30 miles southwest of Ketchikan.

The April 28 permit, as it was written, allowed a 165 meter by 110-meter polluted mixing zone, roughly 10 times the previous permitted size, and a near doubling of the daily copper discharge limit. Niblack was not required to treat the discharge with an existing, on-site chemical treatment plant, and was allowed by ADEC to continue to leave a Potentially Acid Generating (PAG) waste rock pile uncovered. This waste rock pile, left uncovered and exposed to precipitation since 2010, has begun the acid generation cycle and is a significant contribution source to the toxic effluent being discharged into Moira Sound.

Earthjustice submitted a request for informal review to ADEC on April 28 on behalf of Southeast Alaska Conservation Council (SEACC) based on the permitʼs failure to meet the antidegradation and anti-backsliding requirements of the Clean Water Act.

“The Clean Water Act requires us to strive to improve water quality, not degrade it. We’re glad to see that DEC recognized its errors and remanded the permit for another look,” says Kate Glover, a senior attorney at Earthjustice based in Juneau. “We hope the new permit will adhere to state and federal requirements and mandate that Niblack treat its wastewater and reduce — rather than increase — the contamination flowing into Moira Sound.”

ADEC will now have to reconsider the permit and issue a new decision, which will provide a new opportunity for public comment.

“The remand of this permit back to the permit writers shows the importance of organizations like SEACC and Earthjustice keeping a close eye on DEC and holding them to account. The public will have the opportunity to review and comment on the revised permit,” says Aaron Brakel, SEACC’s Inside Passage Waters Program Manager. “The protection of fish habitat and commercial fishing grounds, including the Moira Sound sea cucumber fishery, is a fundamental Alaskan value, and this greatly expanded mixing zone is completely inappropriate.”