Anyone Else Hear Bagpipes? - Trip 6

Tracy Arm is a place for crafting stories. It has all of the trappings for adventure: soaring cliffs, roaring waterfalls, bears, bergs, and glaciers. The whole place is infused with a dynamism that draws people in from around the world, a hyper-concentrated highlight reel of everything that the Alaskan Landscape has to offer. It doesn’t matter who you are or what your background is, when you come to a wilderness like this, you have begun crafting a tale to remember. 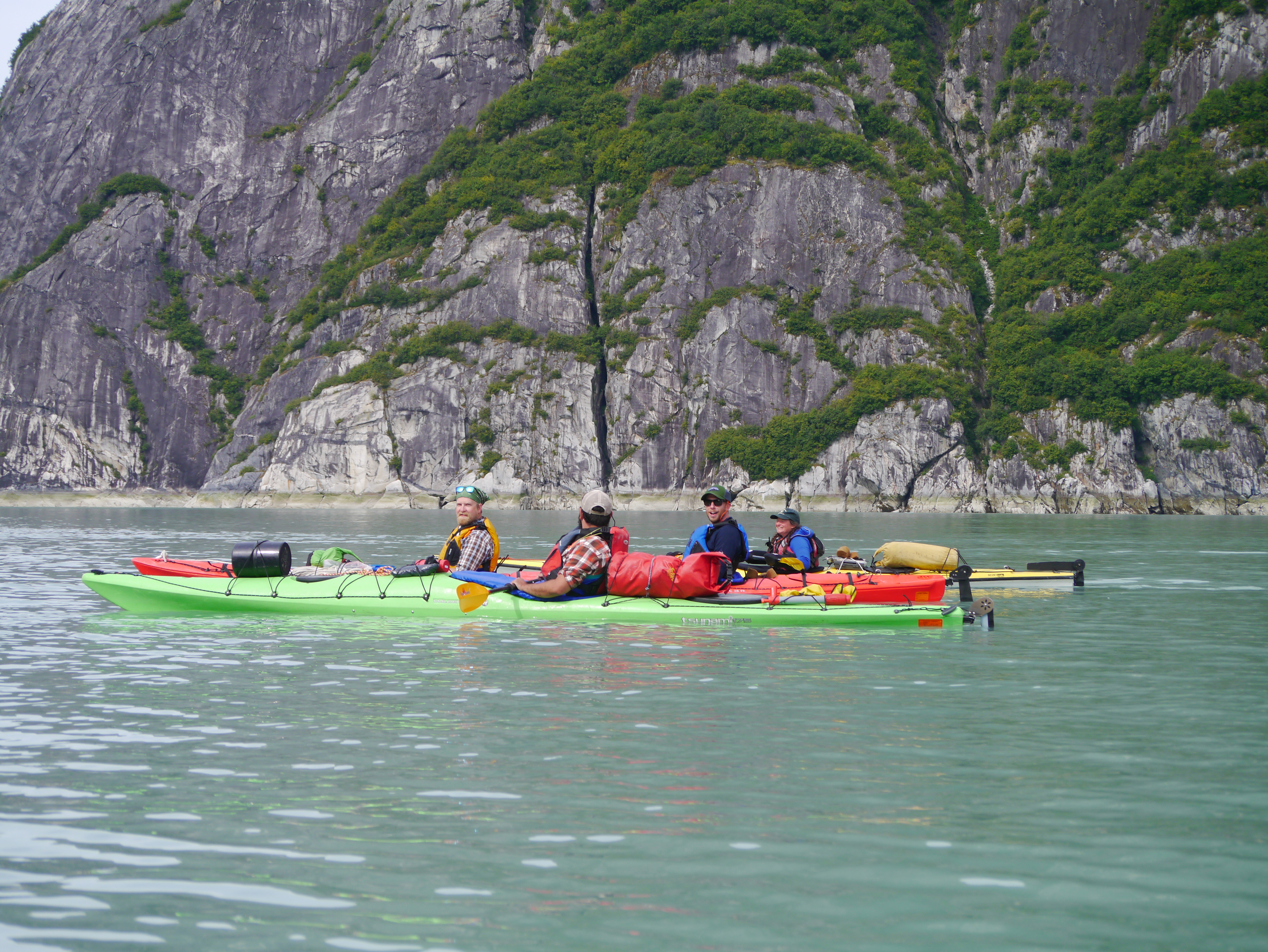 We found other kayakers! Chrissy and Sean are a treasure trove of

insider information for the intrepid few that camp in the fjords. 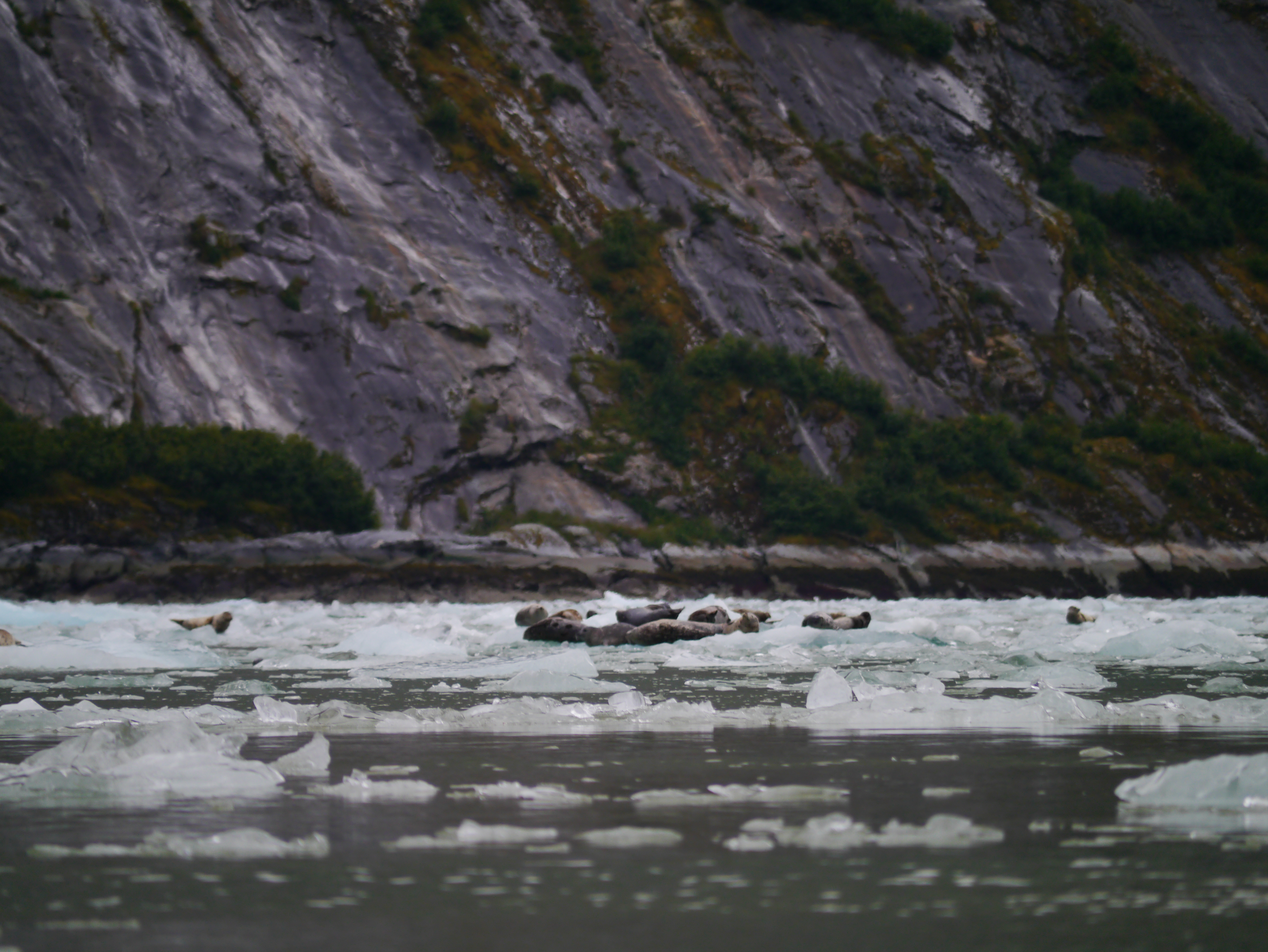 The archetype for this story, interestingly, is set in national law. The pioneering spirit of America relied on the push into wilderness, frontiersmen, and settlers taming the untameable. It was a story that was meant to last forever but ran into the hard limit imposed by a finite world. The American frontier once imagined as inexhaustible, began to run out. It wasn’t until 1964 that we realized this and sought to preserve some echo of the wilderness that once served as the other player in our story. Tracy Arm is designated wilderness, a federally preserved portion of the frontier. In the few places like this where wilderness is still a protected narrative, people flood in to enact their own story. A lot of people. The wilderness starts to look a bit strange.

“Anyone else hear bagpipes?”

Our raft of kayaks quiets. From farther down the fjord, a faint buzzing sound begins to grow. A white yacht appears, steaming straight through the middle of the fjord. I see a figure on the bow. Squinting, I can make out what appears to be a kilt. As the craft draws closer, the buzz shapes into the familiar bars of amazing grace, now echoing off the granite walls of the fjord. Even Chrissy, no stranger to strangeness in the wilderness, is at a loss for words.

Happy seals laze around on the ice.
Pro-tip: Having a huge zoom lens is the best way to get great
pictures of wildlife without disturbing it. But when you’re travelling with
limited space and a limited budget, trying to get pictures from a bobbing kayak,
you make do with what you have.
My first thought is that this stranger is having a profound impact on the quality of solitude. My second is to try to decide if the scene leans closer to Titanic or The Sound of Music. It occurs to me that this would be great footage and I fumble my camera out of three layers of waterproof bagging. I snap a zoom lens on and take aim, but, as if sensing imminent capture by camera, the bagpiper ducks back into the safety of the yacht's interior. The scrap of footage I get is Sasquatch reel material, enough to suggest without proving squat.

I’m amazed and annoyed in equal measure. I’m almost jealous of the story this person must be in the middle of. Who doesn’t want to hear themselves echoed back from the edge of the abyss? In a way, it’s what wilderness is for. It is, according to the government, an experience of solitude. When the land is devoid of other people, you’re free to act however you like, or in a word, naturally. You can run naked through the woods or howl at the moon if you so like. More importantly, solitude is a place to run into the boundaries of the self. Without the mantle of civilization, what is the nature of your character? Wild areas have always been excellent proving grounds for storytelling.

The only problem is that there are now plenty of people about. Chrissy and I raft up with a group of other kayakers. Catamarans, converted tugboats, cruise ships, aluminum skiffs, all on their way to make an experience. One person can feel small in the wilderness, free to reverberate without impact. But now that over a million visitors ply the waters here, the impact of those narratives is exponentially larger. These places need a little breathing room. These experiences and places are a privilege, one that has a long history of being nearly revoked. Keeping these experiences open takes work.

Chrissy and I climb through dense alder brush to a cliff overlooking South Sawyer Glacier. It’s time to get one last estimate of the seal population here before they disperse for the winter. We set up camp chairs and binoculars on tripods. It’s now molting season, an energy-intensive switch from the seal’s summer coat to winter. Harbor Seals have congregated here to take advantage of the icebergs. As we count seals, ships come and go. Zodiacs edge through the ice, closer and closer to the face of the glacier, scattering like flies as it calves. The sturdier boats try to work with the flow and eddy of ice, nosing in for the best view.  I don’t envy the tour operators. Most companies have worked with the Forest Service to draft (and voluntarily follow) a set of guidelines to keep Tracy Arm undisturbed, but the agreed-upon recommendation of maintaining 500 yards from seals at rest shrinks in practice. Basking seals are often obscured by ice until the last second. When we hail the ships by radio, the crews seem happy to hear recommendations from our cliff-top perch.

Later, Chrissy and I hitch a ride out on a passing ship. We share coffee and cookies with friends in the kitchen’s warmth. We make our way up to the lounge, where passengers slowly fill in the cushioned seats and couches. The questions come at a slow place, most passengers are already gorged on the experience of pushing up in the ice and of following seals among the ice floes. They’ve had wonderful, amazing experiences, everything after that is a pleasant haze. For many, it’s the completion of a story long in the making. For Tracy Arm, the story continues.