‘We have to look at the big picture’: Native elder says climate change is latest battle for Indigenous sovereignty 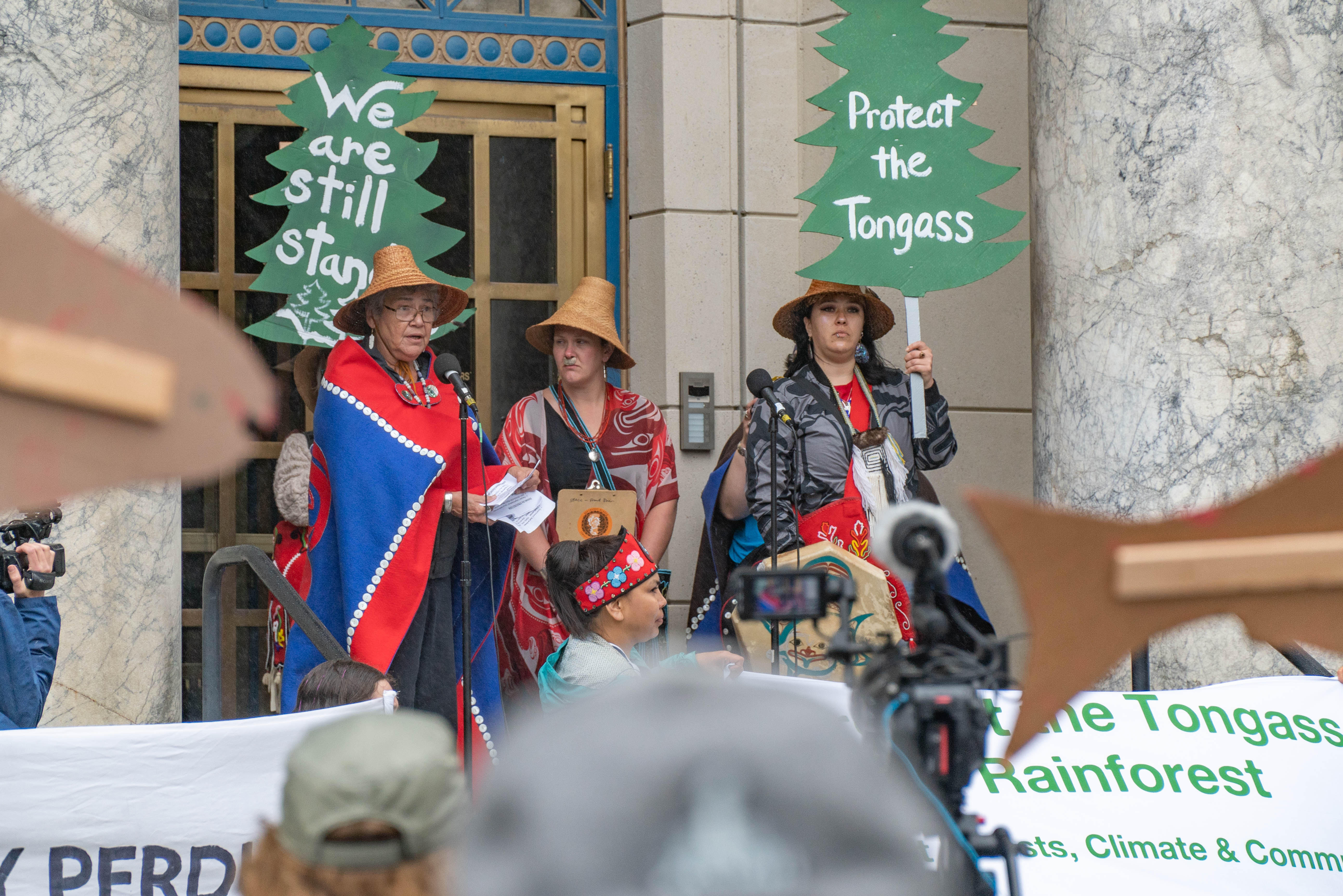 Wanda Culp, of the Chookeneidí clan of Glacier Bay, has battled for the rights of Indigenous people all of her adult life.

For decades, she’s been an outspoken critic of the Alaska Native regional corporations system, borne out of the Alaska Native Claims Settlement Act of 1971. She believes the system wrests direct power from Indigenous people, clans and tribes, and places it in the hands of a third-party, for-profit organization, whose interests may not necessarily lie with the peoples’.

“Our battles for sovereignty have been compromised by ANCSA,” she said. “They have turned our land over to these corporations that have nothing to do with tribes and clans. And I’m not shy about talking about it.”

Climate change is a battle for Indigenous sovereignty as well, she said.

“We have to look at the big picture, and Native voices need to be at the table for all land plannings,” she said. “Our knowledge of the land and our historic use of the land need an equal voice of authority.”

It will be up to the next generation to fight for sovereignty in climate change, she said, noting she’s now in her 70s.

“The future generations of younger people are more alert than my generation was, about the global situation,” she said. “They are the ones that are going to force change.”

Check out the full interview below

When I connected with Wanda on the phone, I barely had a chance to say "Hi", before she dove right in. Our interview begins below:

Wanda Culp dives right in: Our culture follows matriarchal leadership. To protect our culture, we follow our mother’s bloodline. I am Chookeneidí Brown Bear from inside Glacier Bay. The outside Glacier Bay territory of the Huna Tlingit is the L'uknax.ádi Coho and T’akdeintaan Sea Turn clans. My Grandfather is L'uknax.ádi, Harold Bailey Goox Eesh, and he married my grandmother, whose name I carry, Kashaduha, “the one who came to us from Glacier Bay.”

Our battles for sovereignty have been compromised by ANCSA, they have turned our land over to these corporations that have nothing to do with tribes and clans. And I’m not shy about talking about it. I grew up in Juneau and everything is political, and my primary employment throughout my life has been dealing directly with tribes. It is the original tribal people of the land that make up tribes.

As a Native woman who carries my grandmother's name, this is where I hold my ground. Because it seems some of these corporations don’t properly see our land. And they have used ANCSA to take over our land, which is a shame because those battles for sovereignty, for compensation, were fought for by the traditional people. Corporations didn’t fight for it, people fought for it. They are being used as puppets of assimilation against us, instead of working for us. Hoonah is suffering. We’ve had five people pass away in the last two months, and no ferry. It isn’t easy out here, store shelves are bare. 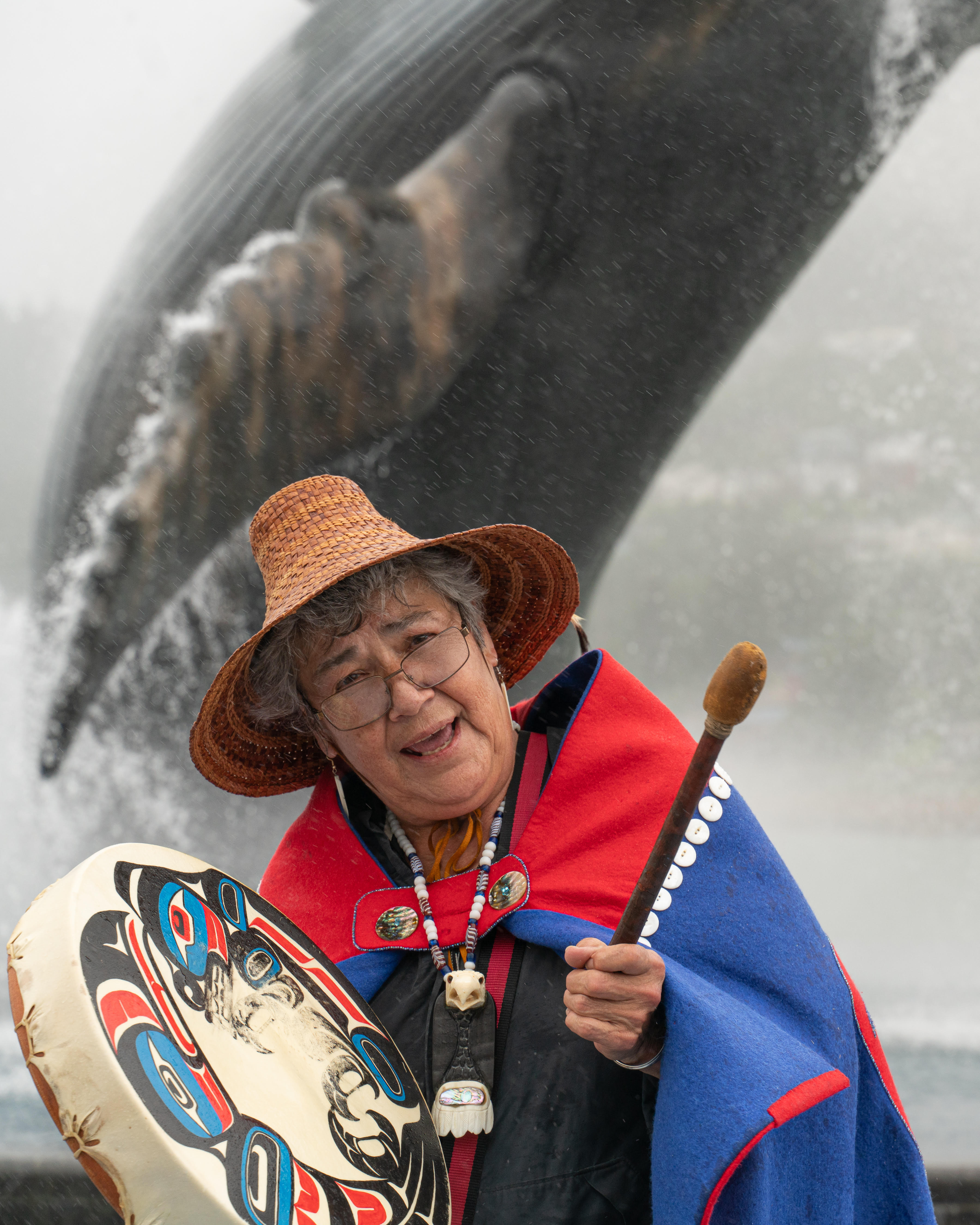 Question: Thank you for just diving right in there and introducing yourself! You’re touching on some of these challenges already. I wanted to ask you about climate change, which isn’t some vague threat in the future, it’s happening now. How is climate change impacting your community right now?

I have three children and now two grandchildren. The youngest is three and she is just so beautiful. But climate change is so scary. Speaking for us in the villages, Tlingit history is so ancient that we have survived all the twists and turns of the environmental changes to our land. We’re the survivors. In our Tlingit history we remember the last big ice age, and the small ice age is in our recent history. The darkness, the great floods, earthquakes, starvation, illness -- we survived it all. What’s going on with climate change, that is so important to our continued sustainability, is that we are tied into the rules of nature as a people. We cannot go against the rules of nature. Our cultural existence depends on understanding the rules of nature. So we rely on the bears, the eagle, the raven, the animals who came before us. Global warming can be controlled the same way our people controlled the fluctuation of natural resources. When the salmon were sparse, no one would harvest until the stream rebounded. We have to go with it, work with it, and fix it. We can’t fight against it, the widespread negative effects of industrial encroachment.

The corporate model has become such a monster, stepping all over communities because of greed. We’ve lost the power to control our own realm because big corporations are affecting our fisheries, our logging, our tourism. They are in the way of our very own land use requirements. There is a sickness happening, and we have to clean up. And we start with industry. They’re taking, taking, taking and leaning on our government. They have too much control of the governments from Juneau to Washington, D.C. and locally within our traditional use areas.

Question: You’ve spoken a lot about your culture, and what it teaches you. Can you speak to how your perspective as a woman, as a mother and grandmother, informs your action on climate change?

Wanda: Women are beginning to be heard finally. In our cultural way, there is supposed to be a balance between women and men. We never could have survived if one was above the other. Women had roles because of her bloodline and her strengths, and men had roles based on the same. But right now, men seem not to be noticing it in the same way most don’t notice a dusty, cluttered house. (Laughs) I don’t mean to offend! Women have for too long been the ones cleaning house. And climate change is like that. This governor is nothing different than past governors. He is selling out Alaska for industrial gain, even though we’re kicking him out the door right now. And when Indigenous people speak up against that, we are also speaking up for all of nature, for all our neighbors. We can’t divide up the land into “wilderness, commercial/industrial and public interest,” this is for logging, commercial fishing, camping/outdoor sports, this is for that. We have to look at the big picture. And Native voices need to be at the table for all land plannings. Our knowledge of the land and our historic use of the land need an equal voice of authority.

Question: It’s obvious you have so much passion for these ideas. How do you serve your community?

I’m not smart enough to know everything. It comes from helping the people. People come here for help, and I hear their words. And that's where power comes from. People come to me, this old bureaucrat [Wanda worked for most of her adult life for the Bureau of Indian Affairs and tribal governments], for help with their junk mail, notices and such that they don’t understand. My age, and my position within the Chookeneidí clan, my family, give me stature amongst the people. I don’t have any official titles or status in any corporation, other than being an original tribal member shareholder into three ANCSA corporations. My roots are in the deepest place: in my clan, in my land, heart and soul. And these corporate models are just false hierarchies. They need to stop pillaging our land and start protecting our land while conducting business in the world of business – leaving tribal affairs to us (the clans).

Question: What would you say to elected officials like Gov. Mike Dunleavy and U.S. Sen. Lisa Murkowski about climate change?

Wanda: They know climate change is here. They acknowledge it. But they are not worthy of an intelligent conversation. They’ve made up their minds. They’re moving forward with the corporate carbon economy. None of them belong to us, they belong to a colonial system that is working against us. And there are these families that are holding on to the power of the corporate system and not letting go. Getting millionaire rich on our fat, ANCSA belongs to the original People of Alaska! And as long as there's one shareholder who is living in poverty, ANCSA is a failure. So what I would say to them is they need to be replaced.

Question: That’s a bold statement! Climate change can feel scary and depressing, but we don’t have time to mope about it. What gives you hope for the future?

Wanda: The future generations of younger people are more alert than my generation was, about the global situation. They are the ones that are going to force change. Look at what is happening in Congress. The white male dominance in Congress is on the decline. I’m in my 70s. We are handing down the battle to the next generation. Some of our people may not have been brought up on the land, but they are still smart enough to know what they missed and feel obligated to protect our land. It's not only young people either, it's Indigenous women all over the world. I am a part of a group called Women’s Earth and Climate Action Network, or WECAN International. And that group has opened up a global dialogue. Just a couple weeks ago, I was participating in a call with another Indigenous women from Brazil. We are having a global conversation about climate change. And we are realizing that our own little efforts in our little parts of the world are growing into a large impact for our future generations. In other parts of the world, women who advocate as I do, are assaulted, raped, murdered. And so it is very important that we stand together, and support each other. I am honored that you listened to me today, but I am just one small part of a much bigger community.