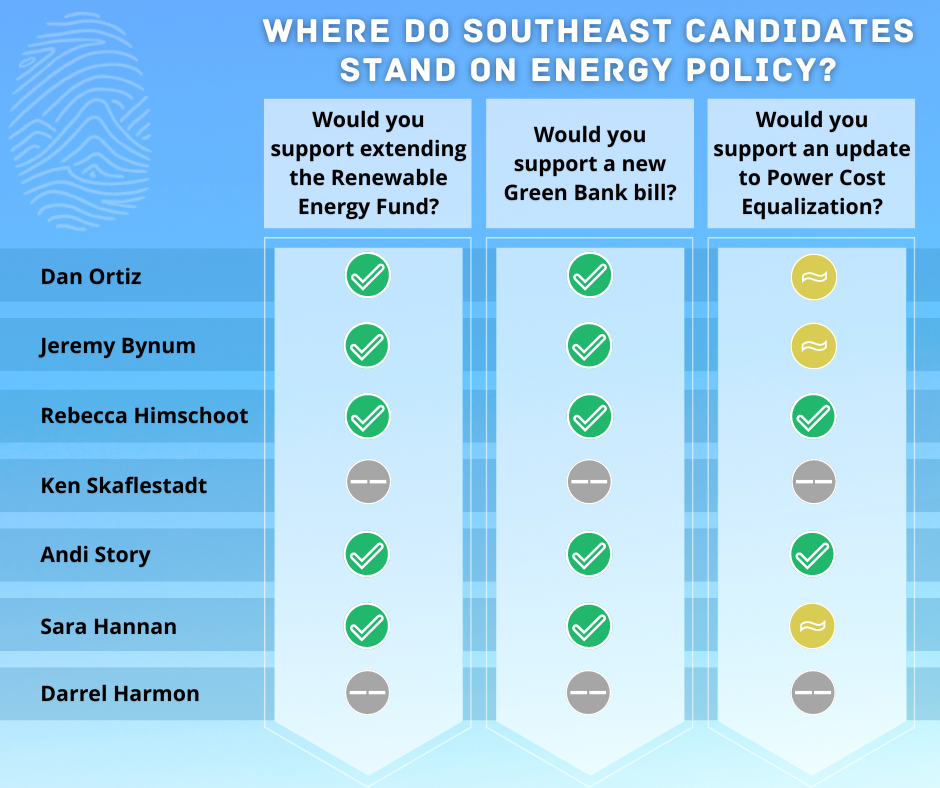 SEACC is targeting three policies that we will be supporting in the 2023 state legislative session: the Renewable Energy Fund, the Green Bank, and Power Cost Equalization. Each of these policies meets our three criteria — they lower emissions, lower costs, and increase opportunity in rural economies. But we’re not waiting for the gavel, we asked every registered state house candidate in Southeast where they stand on those three issues. SEACC supports the passage of these three policies in 2023, so we encourage all of our supporters to see where the candidates stand, and then get out and vote in November!

Whoever wins, sign our online petitions supporting the Renewable Energy Fund and the Green Bank today!

Since 2008, the Renewable Energy Fund (REF) has invested $282 million in Alaskan non-profit utilities, resulting in 95+ operational projects and $158M in matching funds, but is set to expire in 2023. Do you support extending the REF for another ten years, or not, and why?

Dan Ortiz (D1): “Yes. There are still several projects that I know of in the Southeast Region that could potentially qualify for some of the remaining 124M of REF $$.”

Jeremy Bynum (D1): “I support extending the Alaska Renewable Energy Fund (REF), the REF is an important tool that benefits Alaskans, it does so by reducing and stabilizing energy cost. It will help us continue investments that help high-cost energy areas. Lower energy cost will advance the growth and health of our communities. Overall, Alaska needs to develop long-term solutions, this includes the development of a strategy to maximize REF opportunities.”

Rebecca Himshoot (D2): “The Renewable Energy Fund has helped to put money back into our state and push us closer to a renewable energy economy. I support extending the REF, and I will encourage Southeast utilities to apply for funding through REF grants.”

Andi Story (D3): “Yes, absolutely. With the acceleration of climate change, this is extremely important to investing in more renewable energy projects around the state. It may also save communities’ expenses on fuel and utilities.”

Sara Hannan (D4): “I support the extension of the Renewable Energy Fund (REF) and capitalization of $3 billion dollars for it. This would put the REF in the position to be able to meet the needs of projects that are envisioned.”

A “Green Bank Bill” was introduced by Governor Dunleavy in 2022. It proposed to make lending for various clean technologies like heat pumps and rooftop solar easier. However, objections were raised to housing it within the controversial Alaska Industrial Development and Export Agency (AIDEA). Would you support a new Green Bank Bill in the next session, or not, and why? If you do support it, do you have a preference on where it is housed in the state?

Dan Ortiz (D1): “Yes, for the most part, I thought it was a good bill, certainly the underlying idea of the “Green Bank Bill” was good.”

Jeremy Bynum (D1): “I would support a “Green Bank Bill” if it augments and advances the goal of low-cost energy. It is important that such a bill does not diminish or hinder the progress of providing new energy options throughout the state. Any advancement of a “Green Bank Bill” should be done with coordination of other programs and it should also fall within a long-term energy strategy. As far as where it should be managed, I think it should fall under a department that focus on energy and or be developed so that local energy providers are in control of the program.”

Rebecca Himshoot (D2): “Green Banks have been successful in many contexts worldwide, and a Green Bank in Alaska has great potential to help Alaska with the transition to clean energy, as well as supporting tribal sovereignty and other aspects of sustainability. To reach this potential, we need an institution driven by a broader vision of sustainability, transparency, and meaningful outcomes for our rural communities. I would propose housing this program within the Department of Commerce, Community, and Economic Development, in the Division of Community and Regional Affairs; this work is squarely in line with the Division’s goal of supporting Alaska communities to build sustainable economies.”

Andi Story (D3): “Yes, I support a green bank as it makes it possible for various entities to afford switching to energy projects more protective of the environment. I am open to where it is housed. I am very aware that a majority of legislators in the House (21) and Senate (11) and the Governor need to approve this bill. So I am open to what can be agreed upon in the legislative process to house this needed opportunity. Also, AIDEA is under public and legislative scrutiny which I hope will result in best management practices either thru legislative statute changes or other changes. In this last legislative session, Rep. Josephson’s House Bill 271, addressed some of AIDEA’s problems. This bill did not make it thru the legislative process, but I believe it will be introduced again in some form.”

Sara Hannan (D4): “I support a “Green Bank” being established, but as they say the devil is in the details. Getting broad enough support to pass while accounting for the controversy about AIDEA and its broad decision-making authority will be the political dance. Having the executive branch and legislature in agreement about where it is housed is only one of the hurdles.”

Power Cost Equalization (PCE) is an important mechanism for keeping residential utility rates affordable in Rural Alaska. Unfortunately the formula used for PCE has unintended consequences that often punish utilities for switching to renewables, because it compensates based on the amount of money spent on diesel. The current formula was determined by the Regulatory Commission of Alaska (RCA), which oversees utilities. Would you support an update to the PCE formula to address this issue, either through the RCA or through legislative action? Why or why not?

Dan Ortiz (D1): “Undecided, I would need to consult with Legislators and Community Leaders who represent regions where the PCE fund has more of an impact on those regions than in mine, to determine the impact of “updating” the bill as described above.”

Jeremy Bynum (D1): “The Power Cost Equalization (PCE) program is critical in helping rural communities. We need to ensure that this program is protected for its intended purpose and is used in conjunction with projects that will lower overall energy cost. PCE can also be used to work hand-in-hand with the Renewable energy Fund (REF) and other programs to ensure that more rural communities see benefits. We need to ensure that this is a tool that continues to benefit communities and helps drive down cost of energy. PCE is one tool to help Alaskans focus on long-term energy solutions; in addition, Alaska needs an effective and comprehensive long-term energy plan that will allow us to leverage many of these programs for our future.”

Rebecca Himschoot (D2): “The Power Cost Equalization program is a critical support for rural communities in the face of high energy costs. I support restructuring this program to create incentives for rural Alaska communities to convert to renewables while continuing to provide essential support.”

Andi Story (D3): “Yes, I support a change to include recognizing compensation for renewable energy costs as well as diesel. It makes good sense to do this as many communities are moving to using renewable energy sources. Updating the formula should be pursued thru the RCA and legislative process as both take time and one may have the public and/or political support to happen sooner than the other.”

Sara Hannan (D4): “Although I am more than willing to consider how we improve PCE to support renewable energy investments, the battle for the last four years has been to preserve, protect, fund PCE. I will work with other supporters of PCE to find ways to improve it to help Alaska grow our energy independence away from fossil fuels.”