In Wildness is the Preservation of the World - Trip 5

The first petroglyph we uncover lies in a pseudo-sand wash of shale. Lydia scoops out smooth flakes with both hands, not bothering with tools or gloves. Slowly, a wide stone slab appears, still firmly rooted in the earth, but with the exposed top undulating with ripples and curves groundout by human hands. Lydia brushes at the top, then points. Here’s the eyes, hands, a mouth. As she describes it, a face is suddenly summoned, staring right back at me with wide eyes. It’s been waiting on this beach for so many years, sometimes exposed to the wind, sometimes hidden, but always on this exact spot. The style is uncanny. The figure splays out on the rock, stretching in open planes and squeezed into the edges. Formal ovoids and u-shapes are absent. The rock face is all circles, faces, and designs without the thick lines that usually define Tlingit representations. Is staggering age or stubborn medium responsible? It’s hard to say for an amateur like me to say. 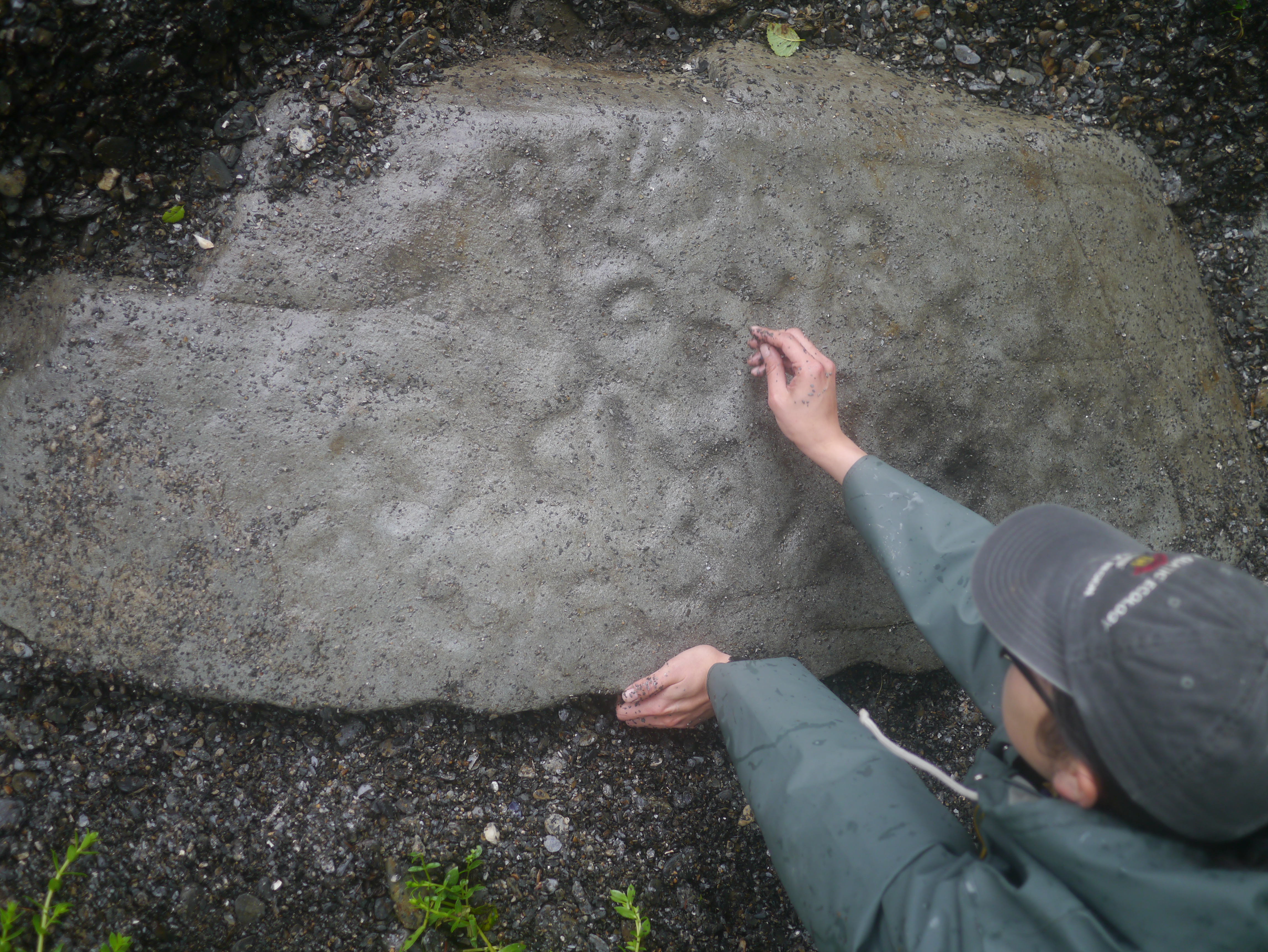 Rachel Myron and Lydia Mills uncovering the first petroglyph. Many petroglyphs are naturally covered or revealed by the movement of sand on the beach.

The itinerary for this week takes us out of the kayaks, to the edge of the wilderness. It also takes us out of the front seat: Sean Rielly and I are assisting Rachel Myron and Lydia Mills, resident archeologists at the Forest Service, with an expedition to document sites and artifacts that range from the historically documented advance of colonial homesteaders to the pre-contact millennia of Tlingit habitation. Lydia rides out with us in a skiff crammed with gear. Her archeological training is augmented by a deep and intimate knowledge of Southeast Alaska’s natural world. While we set up camp, Rachel makes an entrance as her floatplane touches down on the water and noses into shore. Rachel has a long relationship with the Forest Service that ranges up and down Southeast Alaska. She’s a walking encyclopedia of archaeological work and sites, having personally been involved with many. The tracts of the Tongass the two cover are so vast and varied that the relatively new scrutiny of archeological documentation still yields troves of information with every outing. 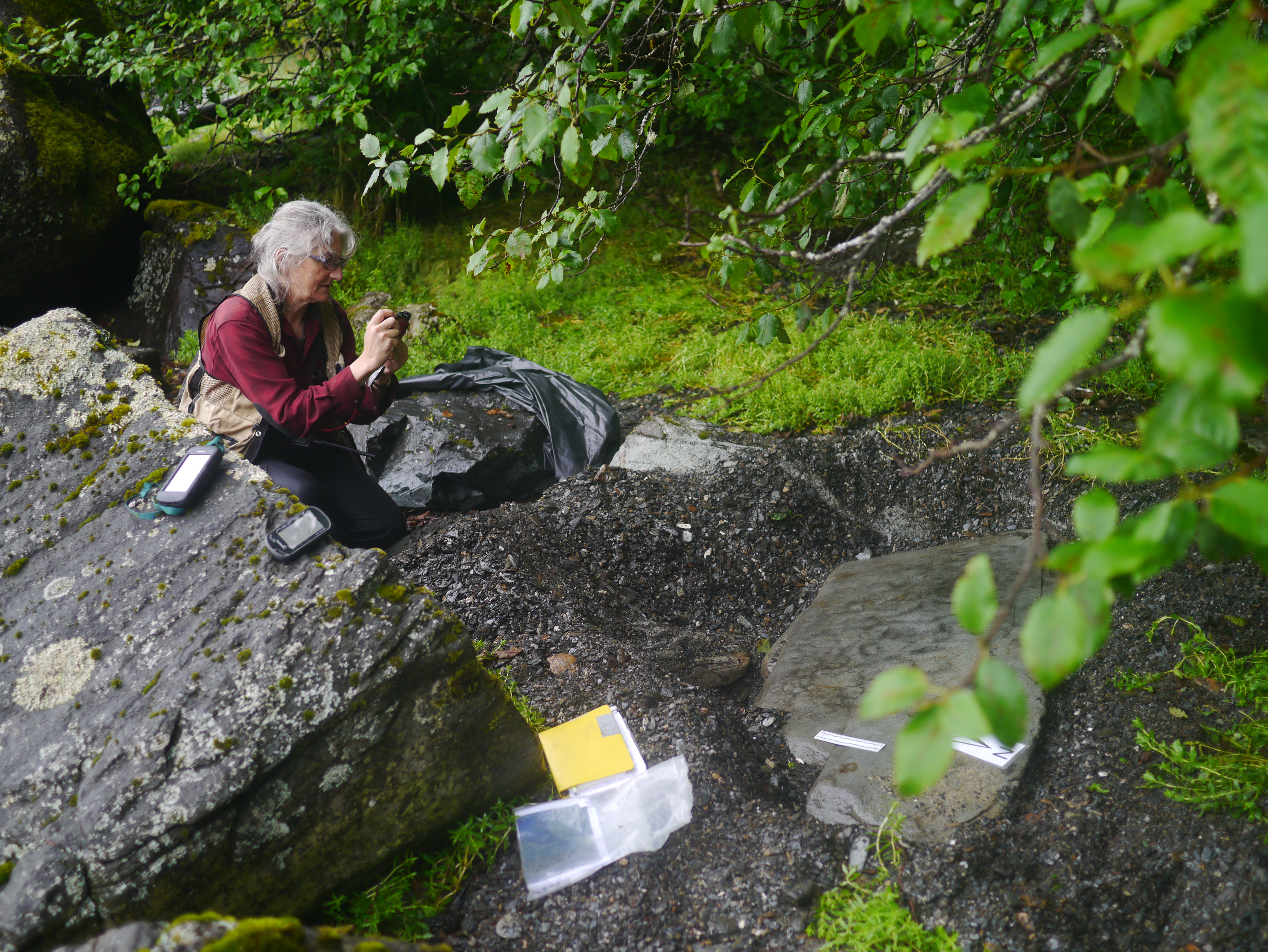 Properly documenting some of the sites requires a range of tools.

As we uncover, measure, photograph, and rebury the petroglyphs, the variety becomes more and more striking. A feminine face, more realistic than representative. What Lydia surmises is a woodworm figure, carved in scalloped relief. Seemingly abstract lines and forms. The range of styles, to my untrained eye, hints at millennia of habitation. Some of the patterns are so worn that they only appear once the rocks have been wetted down. Tilt your head, angle yourself against the light just so, and a pattern emerges against the random ridges and bumps of natural wear. Blink and it might disappear. Rachel sets a marker showing true north and plastic ruler next to the glyph, showing its size and orientation along the beach. They’ll be compared to earlier samples to determine if the figures are wearing down appreciably. Some have lasted thousands of years, others have worn enough from outing to outing to no longer be usefully studied. Some are naturally buried as the sand on the beach builds up. This might subject them to greater wear as the waves wash against them, or protect them in an unyielding tomb. The greatest threat appears to come from other people, who may purposefully or accidentally deface the petroglyphs, or worse, remove them altogether.

We leave everything as we found it. When Rachel and Lydia find brass tools washing out of a streambank next to an abandoned mink farm, we crowd around and marvel at the shining instruments. They are cataloged and photographed. Then they go back where they were found. Science today no longer adheres to the brash, often colonial impulse of artifact collection. The value of these objects is found as much in their emplacement as in their physical being. Although they may last longer in a climate-controlled archive, they would lose meaning once removed. Likewise, this place would lose part of its history without these objects. 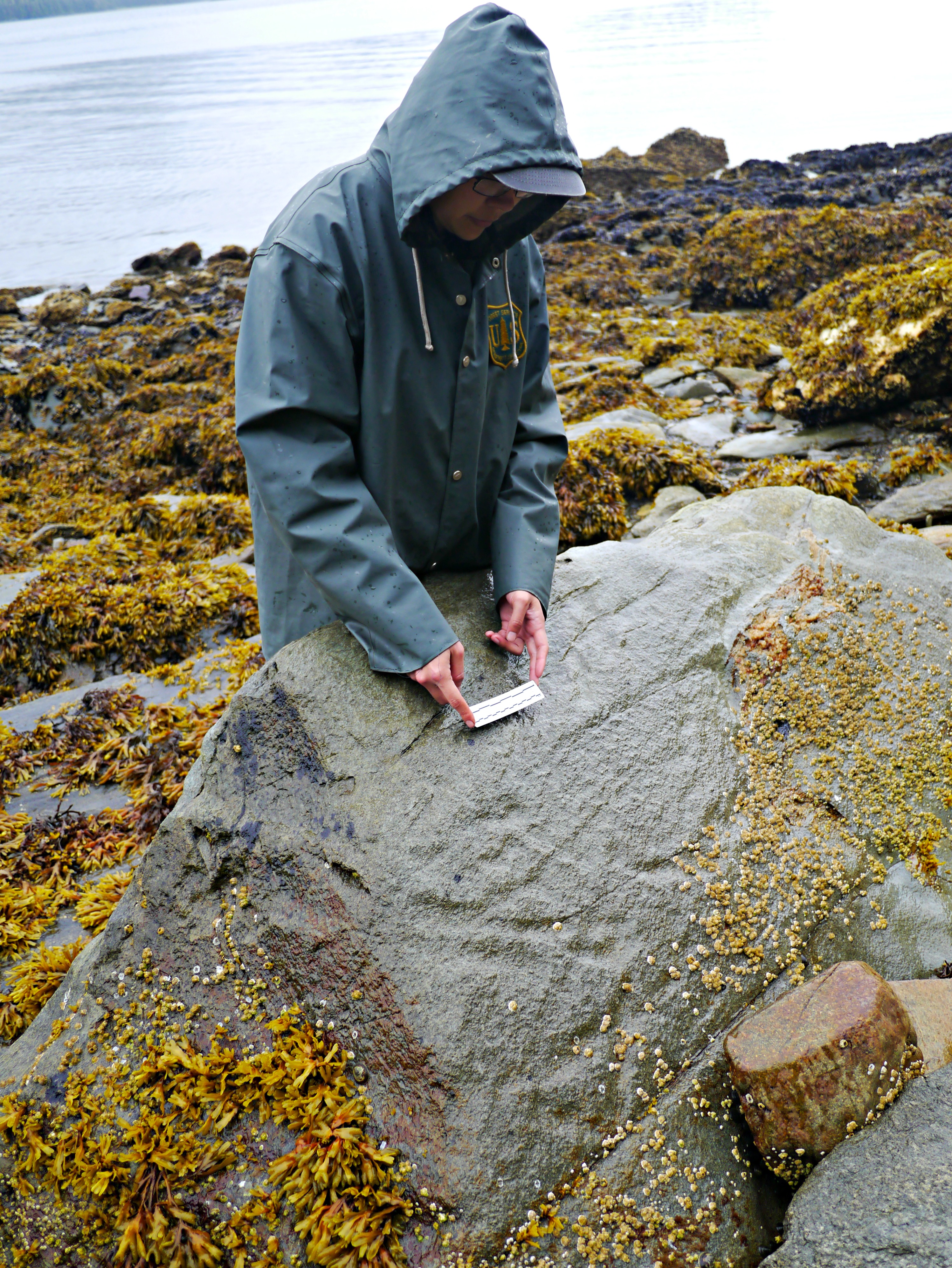 Lydia gets a measurement on one of the more exposed rocks.

Rachel guides us to a small rise overlooking the water. She and Lydia are following an old trail used by homesteaders, confident that it was built on something even older. Armed with long, stainless steel coring tools, we punch through moss, roots, and loam into an ancient beach. At the very tip, black. Lydia shows how it smears on the hand like a grease pencil, how it’s dotted with ancient flecks of shell. The telltale mix of ancient charcoal and shells reveals the site of an ancient midden, an accumulation of the detritus of human life built up over generations. The fact that it sits on a layer of beach raised high above the water hints at great age, either a higher ocean level or thousands of years of isostatic rebound (the rebound of land once compressed by ice fields or glaciers).

Rachel lays out a GPS unit on the site like a talisman, right in the middle. While we wait, it soaks up signals from the sky, pushing a pin through the find as if it would otherwise blow away in the wind.

The week ends and we shove our equipment back into the skiff. The shoreline scrolls by as the boat glides on glassy water. Now that the curtain has been lifted, every nook and cranny of the beach feels chock full of possibility. How many times have I walked right over a thousand years of history unaware? Sean eases the boat into an inlet I’ve never explored before; there’s time for the researchers to visit one more site before we make our way back to town. It’s sensitive, neither Sean nor I am invited onto the tiny skiff to accompany them. It looks the same as the rest of the coast, which is to say beautiful and wild. I am glad for their careful stewardship, keeping the human history in the wilderness. It speaks of a long and abiding relationship between people and the natural world, so different than the sprawling suburbia and clear-cut farms found in so many other places. We need reminders like this. We need to find ourselves in the wilderness.