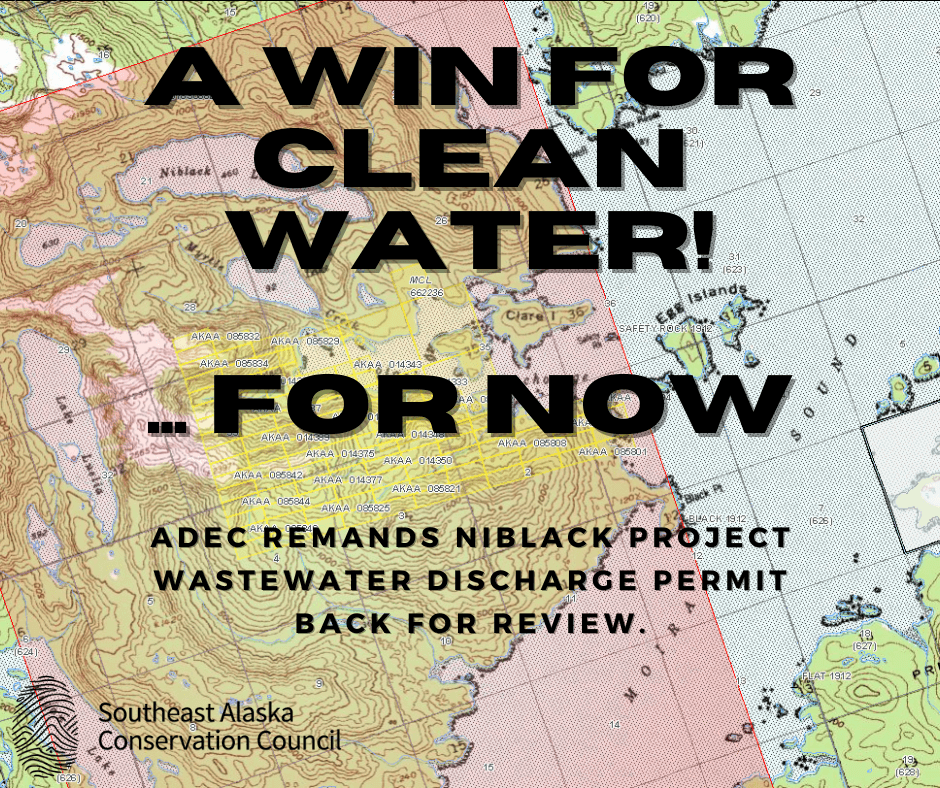 Keeping track of mining projects in Southeast Alaska is an important part of the work we do at SEACC. Recently, SEACC and our partners at Earthjustice had some success in an appeal for a water discharge permit for an exploration project on Prince of Wales Island.

The Niblack Project in Moira Sound blasted out an adit in 2008 in order to do exploration drilling underground. Some of the rock that came out of the mountain was sulfide enough to need special handling because of the risk of acid generation and metals leaching. Unfortunately, the state of Alaska allowed a Potentially Acid Generating (PAG) waste rock pile to remain uncovered on the surface instead of being returned back underground and the adit plugged within two years as their permit anticipated.

Rather than taking care of their mess, the project went into “interim” closure. And that potentially acid-generating pile? Well, you can strike the word potentially. By 2018, the acid-generation cycle had begun, and now that exposed rock pile is leaching dissolved metals in a highly toxic effluent which is being dumped into Moira Sound.

Instead of the project being cleaned up, or even requiring water treatment for the dissolved metals at an existing onsite chemical treatment plant, the Alaska Department of Environmental Conservation (ADEC) issued a permit allowing a 10-fold increase in the size of the mixing zone in Niblack Anchorage to 165 meters by 110 meters and a doubling of the daily copper discharge limit.

The Clean Water Act has a backsliding requirement that doesn’t allow a new discharge permit with less stringent requirements than those in a previously issued permit, except under special circumstances — which are not met in this case.

Why does this matter? Fish habitat protection is critical in Southeast Alaska, and creating a large toxic sacrifice zone near shore, a mixing zone where chronic and acute impacts of toxic mine waste are allowed, is a really big deal. If ADEC is unchecked in writing massive and unnecessary expansions into successive water discharge permits, we are going to have a lot of problems in Alaska mining projects.

Thanks to Dr. Dave Chambers of the Center for Science in Public Participation for raising the warning on this problem. By working together with Dr. Chambers and Earthjustice, SEACC threw a wrench in this permit and resulted in it being remanded to the permit writers with special emphasis on anti-degradation and backsliding.

But the job isn’t over. A new permit will be in the works, and we can use your help. We’ll let you know when the permit is out and the comment period opens. Also, if you spend time on the southeast side of Prince of Wales and at Moira Sound, we would particularly like to hear from you. Email me at [email protected], or drop me a line at 907-586-6942.