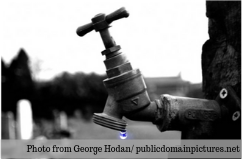 Most of the PFAS contamination in Alaska is found in the groundwater near airports that use Aqueous Film Forming Foam (AFFF) for firefighting.  The state of Alaska tests communities with certified airports where PFAS-containing AFFF was used and likely entered the groundwater.  These communities include Fairbanks, North Pole, Eieslon, Utqiagvik, Dillingham, Gustavus, Yakutat, Galena and King Salmon.  If your community is not on this list, it doesn’t mean the groundwater isn’t contaminated.  The local governments of other communities that have a possibility of contamination, such as Juneau, are also conducting groundwater testing.  Juneau’s results are expected in a couple weeks.  ADEC has published a list of labs approved for PFAS testing in drinking water for any communities or individuals conducting testing on their own.

The Alaska Department of Environmental Conservation (ADEC) has reduced their standards for PFAS testing and protections.  This will leave us at higher risk for PFAS exposure and health impacts, despite increasing knowledge of this widespread, emerging problem. 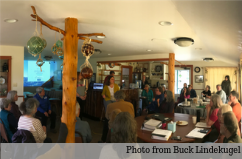 In May, SEACC staff attended a PFAS Summit in Gustavus, hosted by the Alaska Community Action on Toxics (ACAT) and the Gustavus PFAS Action Coalition (GPAC).

A new coalition composed of representatives from across the state, Alaska PFAS Action Coalition (APAC), was formed at the summit.  Together, these groups are raising awareness about the issue, providing water testing kits, and advocating for more protection.

Currently, coalition representatives are working to draft two bills for the next legislative session.  The goals are for the state to establish a Maximum Contaminant Level (MCL) standard and to cease use of all PFAS, specifically in the Aqueous Film Forming Foam (AFFF) which has contaminated many of our communities.  There is presently an option for some airports to switch to a sodium bicarbonate (baking soda) fire suppressant, but the Dept. of Transportation (DOT) refuses to do so.

SEACC will continue to coordinate with the coalition and explore ways to support their efforts and the communities impacted by PFAS contamination. 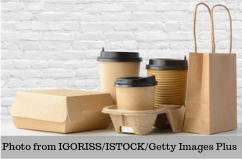 PFAS Can be Found Almost Everywhere... Even in Our Compost

PFAS chemicals form very strong bonds that don’t naturally breakdown over time in nature the way most chemical compounds do.  This bond has made PFAS chemicals incredibly useful in our everyday lives since the 1950s as a waterproof, heat and stain resistant treatment for fabrics like raingear, infant clothing, upholstery, mattresses and carpet, food packaging, nonstick cookware as well as foams used in fighting petroleum and chemical fires.

Once PFAS chemicals enter the groundwater, they are persistent and exceptionally difficult to clean up.  Not only do they spread in groundwater and streams, but also through air pollution across wide areas.

One surprising outcome from a recent study demonstrated that commercial compost facilities that accept biodegradable food containers have a significantly higher presence of PFAS than those facilities that don’t.  These containers often contain PFAS to repel water and oil.  This is very concerning as many people use compost as a source of nutrients for plants and food production and PFAS can accumulate in plant and animal tissues, including fish.

Learn more about this study here.

We have heard increasing concern about PFAS from our members across Southeast Alaska and residents throughout the state, from scientists and health officials alarmed by study results, from decision-makers grappling with how best to move forward, and from communities standing up to large chemical manufacturing companies and non-responsive governments to demand change.

Kelly McLaughlin, resident of Gustavus directly impacted by PFAS contamination and Chair of the Gustavus PFAS Action Coalition (GPAC), has taken this responsibility on, out of necessity.  In testimony delivered to the House Resources Committee in May, McLaughlin explained, “We are doing the work our state should be doing: raising public awareness, making public the results of PFAS fish testing that the state attempted to suppress, advocating for the toxic AFFF to be removed from our airport and all Index A Airports, organizing for medical monitoring and blood testing to take place.  We are living in homes poisoned by toxic chemicals, and the Alaskan public largely hasn’t even heard of PFAS.”  You can read her full testimony here.

While Alaska has been slow to respond to these concerns and has maddeningly rolled back protections, defying logic and the public’s trust, there have been some positive developments in recent months.  Momentum is building and pressure on PFAS manufacturing companies is also growing.

The state of New Hampshire recently announced two statewide lawsuits against eight chemical manufacturing companies, including 3M and DuPont.  So many drinking wells have been contaminated by PFAS that many New Hampshire families must now rely on bottled water.

The global community is also responding.  Just last month at the Stockholm Convention in Geneva, the UN Conference of the Parties unanimously agreed on a global ban on the use of PFOA (although the United States is not a party to the Convention and therefore not affected by the ban).

This is a toxic water crisis and it will take all of us to push our local and state governments to take immediate and protective action to address PFAS contamination and to demand accountability from the powerful manufacturing companies profiting from the continued use of PFAS.

Learn more about PFAS and what you can do:

Do you have an idea for a topic you’d like us to cover in Water Currents?  Let us know and we'll consider it for a future edition!

If you’re enjoying Water Currents, or have comments, please contact Sarah at sarah@seacc.org or 907-586-6942 to let us know.

Stay connected with SEACC - Follow us on social media