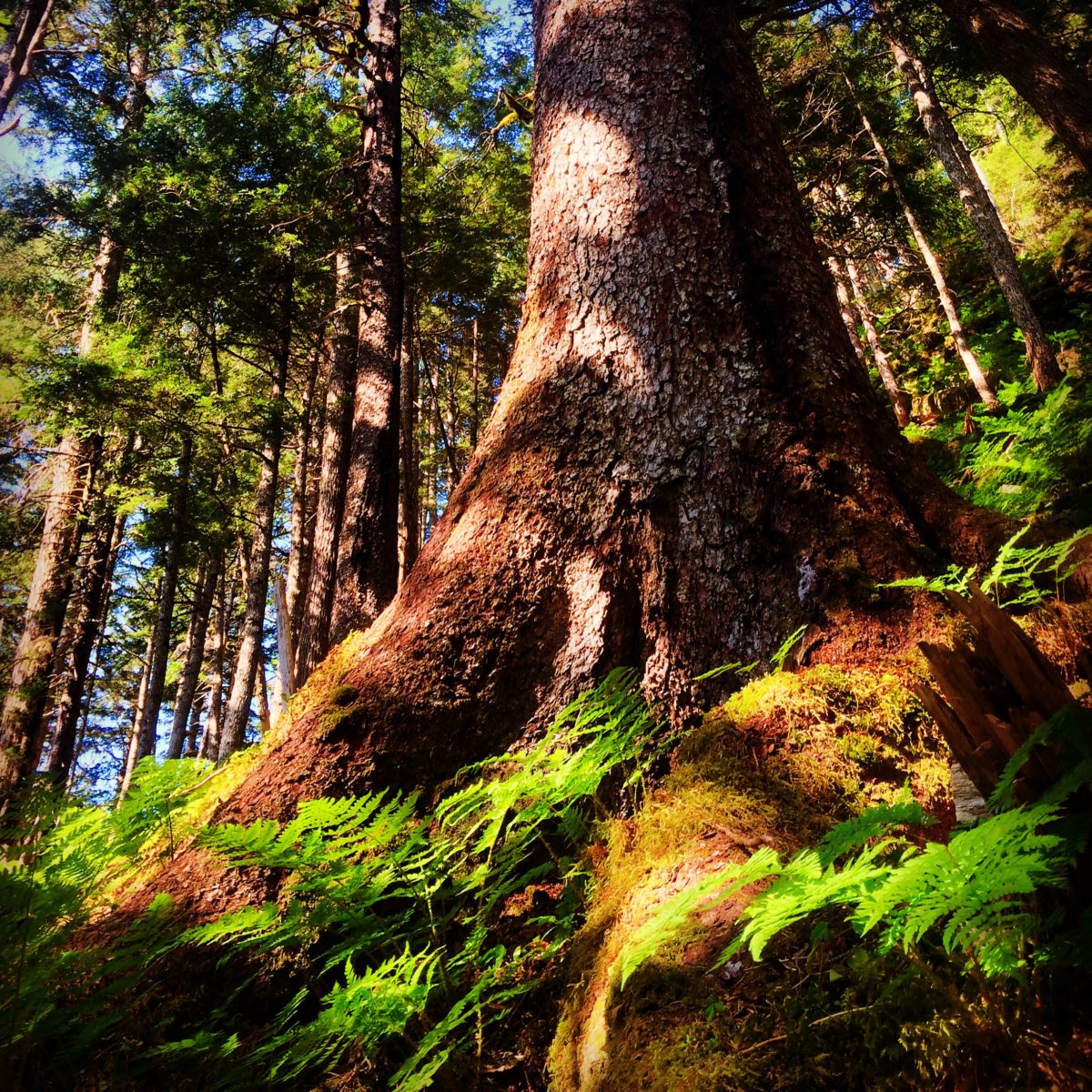 You can read the lawsuit here.

President Trump’s shortsighted rollback of the Roadless Rule goes against the will of the people — 96% of all unique public comments supported keeping Roadless Rule protections on the Tongass — and jeopardizes the ancestral homelands of the Tlingit, Haida, and Tsimshian people. Many Indigenous communities continue to rely on the Tongass for fishing, hunting, foraging and traditional ways of life. Removing forest protections will have staggering consequences for their culture and food security.

Gutting the Roadless Rule imperils unique wildlife and salmon-producing waters, and threatens the livelihoods of commercial fishing families and small businesses in tourism and recreation. The Tongass produces some 25% of West Coast salmon, and attracts millions of visitors from around the world.

Under the incoming Biden administration, the Tongass could play a critical part as a carbon sink in Biden’s plan to address climate change, as well as his biodiversity pledge to protect 30% of public lands by 2030. Without the federal Roadless Rule, the vast stores of Tongass carbon in these formerly protected areas face a grave threat from industrial clearcut logging and road building, which would eliminate ancient forests that are home to key species like the Queen Charlotte goshawk and the Alexander Archipelago wolf.

A full list of quotes from plaintiffs joining today’s lawsuit can be found here. Here are a few select statements:

“We are deeply concerned about the protection of the Tongass National Forest, where our ancestors have lived for 10,000 years or more,” said Joel Jackson, Tribal President of the Organized Village of Kake. “We still walk and travel across this traditional and customary use area, which is vast and surrounds all of our communities to the north, south, east and west. It’s important that we protect these lands and waters, as we are interconnected with them. Our way of life depends on it.”

“The process used to create the Roadless Rule exemption was flawed, said Lee Wallace, President of the Organized Village of Saxman. “The U.S.D.A ignored its trust responsibilities to tribes, failed to engage in meaningful consultation, ignored widespread opposition to the exemption, and favored the State of Alaska with $2 million in unlawful payments. This lawsuit is necessary to protect Tlingit and Haida peoples’ way of life and resources—not just for today but for future generations.”

“The Tongass Forest is my home. Home to the ancient Tlingit and Haida Indigenous Nations. It is where my ancestry originates, my bloodline is Indigenous to this land, its DNA is my DNA,” said Kashudoha Wanda Loescher Culp, a Tlingit activist and Tongass Coordinator for the Women’s Earth and Climate Action Network. “The air we breathe, the water we depend on, the land we live upon, all pristine. It is a life to cherish. It is a way of living worth fighting for. The repeal of the Roadless Rule will only lead to the destruction of our homelands, and subsequently the destruction of our communities who depend upon the abundance of the forest. This is an attack on our peoples and the climate. The Trump Administration’s decision to open the Tongass to roads, logging and mining is an underhanded misuse of Congressional authority and the battle will go on— we will continue to rise in defense of our homelands.”

“My name is Rebekah Sawers, I am Yupik and I live in Hoonah, Alaska. The process to repeal the Roadless Rule has been mired in corporate interests that do not represent the public but only seek to exploit the land and open the forest to further logging and mining interests. I am speaking out not only on behalf of my Tlingit daughter, but for all the other brothers, sisters, grandfathers and grandmothers who live in the Tongass and want the Roadless Rule to remain. Until October, the Roadless Rule had been in place for almost two decades, protecting the trees from mass logging, supporting the growth of local business, ensuring community access to traditional foods and medicines, and allowing the forest to heal. It is important that this land stays wild and free.” Rebekah Sawers, Yupik, student, Women’s Earth and Climate Action Network (WECAN) International

“I am an Indigenous women of the Tlingit Nation of the L’uknaxh.ádi, the Coho Salmon Clan under the Raven moiety from the Frog House,” said Kari Ames, Tlingit, Keeper of Traditional Life-ways, Women’s Earth and Climate Action Network (WECAN) International. “I am deeply rooted to this land for thousands of generations as a steward of this land. We have been here since time immemorial our elders say, and I follow the footsteps of my ancestors. In the Tongass, there are innumerable fish and game populations, and unparalleled recreational and business opportunities. Fishing and tourism are billion dollar industries, which Southeast Alaska economies are based upon. Now, with the removal of the Roadless Rule by the Trump Administration, these growing businesses will be harmed, and our cultural and Indigenous rights to protect Haa Aani, Our Homelands, will be negatively impacted. I am a strong Tlingit woman standing with the Tongass, speaking for the Aas Kwaani, the Tree People, and I will continue to fight for the Tongass despite the government’s decision to side with industry over people. This is our way of life to fight for our Indigenous rights as human beings that live by the forest and tide, the Tlingit.”

“The Tongass National Forest is Southeast Alaska’s SeaBank, providing annual dividends in fish, wildlife, and recreation as well unmatched ecosystem services that include water regulation, provisioning, habitat and cultural wealth,” said Linda Behnken, commercial fisherman and Executive Director of Alaska Longline Fishermen’s Association. “SeaBank’s natural capital produces economic outputs worth several billion dollars per year to residents, visitors and society as a whole — and it will generate that output every year, provided we take care of the underlying natural capital of the forest, estuaries and ocean. Southeast Alaska’s future depends on safeguarding the natural capital that sustains our economy and cultural identity. It is time for decision-makers to see the forest for more than the board feet.”

“Southeast Alaska hosts two-thirds of all Alaska visitors, making it the most visited region of the state,” said Dan Blanchard, CEO of UnCruise, a small vessel company providing outdoor recreation experiences. “Forest Service lands, particularly inventoried Roadless areas, are critical to drawing these visitors, and generate roughly $245 million annually — over two-thirds of Tongass National Forest visitor spending. We depend on the ability to market and provide unique recreation experiences, and our clients expect to see ‘wild’ Alaska and prefer intact natural landscapes. Clearcutting and timber road construction would force us to divert our travel routes to avoid seeing or being around clearcuts. This would negatively affect the outdoor recreation economy and Southeast Alaska’s reputation as an adventure travel destination.”

“As Southeast Alaskans are keenly aware, the public process around the Alaska-specific Roadless Rule, in which the Trump administration exempted the Tongass from the Roadless Rule itself, was flawed from the start,” said Meredith Trainor, Executive Director of the Southeast Alaska Conservation Council. “The Southeast Alaska Conservation Council has always gone to court to fight to save the places we love, and we are honored to do so today in partnership with Tribal leaders and other partners from the conservation community. We will work to reinstate Roadless Rule protections for our forest in the early days of the incoming Biden Administration, even as we challenge the Record of Decision from the dark days of Trump, in court.”

“Like so many of this administration’s environmental rollbacks and anti-environment policies, Trump’s rushed Tongass roadless rulemaking ignored sound science and public input at every step,” said Andy Moderow, Alaska director at Alaska Wilderness League. “Old-growth forests play a vital role in helping to slow climate change. The Tongass alone stores hundreds of millions of metric tons of CO2 and sequesters millions more annually. The complete removal of roadless protections on the Tongass will only worsen the climate crisis, not to mention fragment wildlife habitat and destroy salmon runs. We’re joining our partners to fight this extreme rollback and preserve some of the most intact expanses of temperate rainforest remaining in the world.”

“Stripping roadless protections for a shocking 9 million acres in the Tongass National Forest will pave the way for more old-growth clearcutting, destruction of wildlife habitat, and only add to our climate change and biodiversity loss woes,” said Nicole Whittington-Evans, Alaska program director, Defenders of Wildlife. “We won’t back down until the protections of the Roadless Rule are reinstated.”

“The Trump administration’s removal of roadless protections on the Tongass National Forest is arbitrary and reckless,” said Karlin Itchoak, Alaska state director of The Wilderness Society. “Allowing logging and other industrial development in one of the most important old-growth rainforests in the world not only threatens centuries-old trees, but also jeopardizes one of the planet’s most productive carbon sequestration strongholds and a critical tool for addressing the climate crisis.”

“The Tongass is our nation’s living, breathing example of strength and resilience in the face of climate change. Just look at the people who have stewarded these lands and waters since time immemorial, or the endemic species like spruce grouse, marten, black bears, and wolves who carry with them generations of adaptations for life in this rainforest archipelago,” said Natalie Dawson, Executive Director at Audubon Alaska. “To turn our backs on this forest and yield to political pressure is to rob our future generations of wild salmon and the magic of laying eyes on ancient cedar trees marked by ancestors and home to goshawk nestlings.”

“Alaskans, both statewide and those living in the region that includes the Tongass National Forest, commented in overwhelming numbers against removing or weakening any Roadless Rule protections for the Tongass,” said Becky Knight, president of the regional organization Alaska Rainforest Defenders. “They recognize the many causes for protecting the Tongass’ ecosystem integrity which is largely dependent on the sanctity of its roadless areas, and which are the reason for this lawsuit.”

“Preserving the Tongass is a matter of survival. It is essential to the subsistence culture and food security of Indigenous peoples. As one of the planet’s major carbon sinks, it is also essential for mitigating the climate crisis that threatens us all. We hope today’s action will bring renewed protections for the Tongass and those who depend on it,” said Andrea Feniger, Sierra Club Alaska Chapter Director.