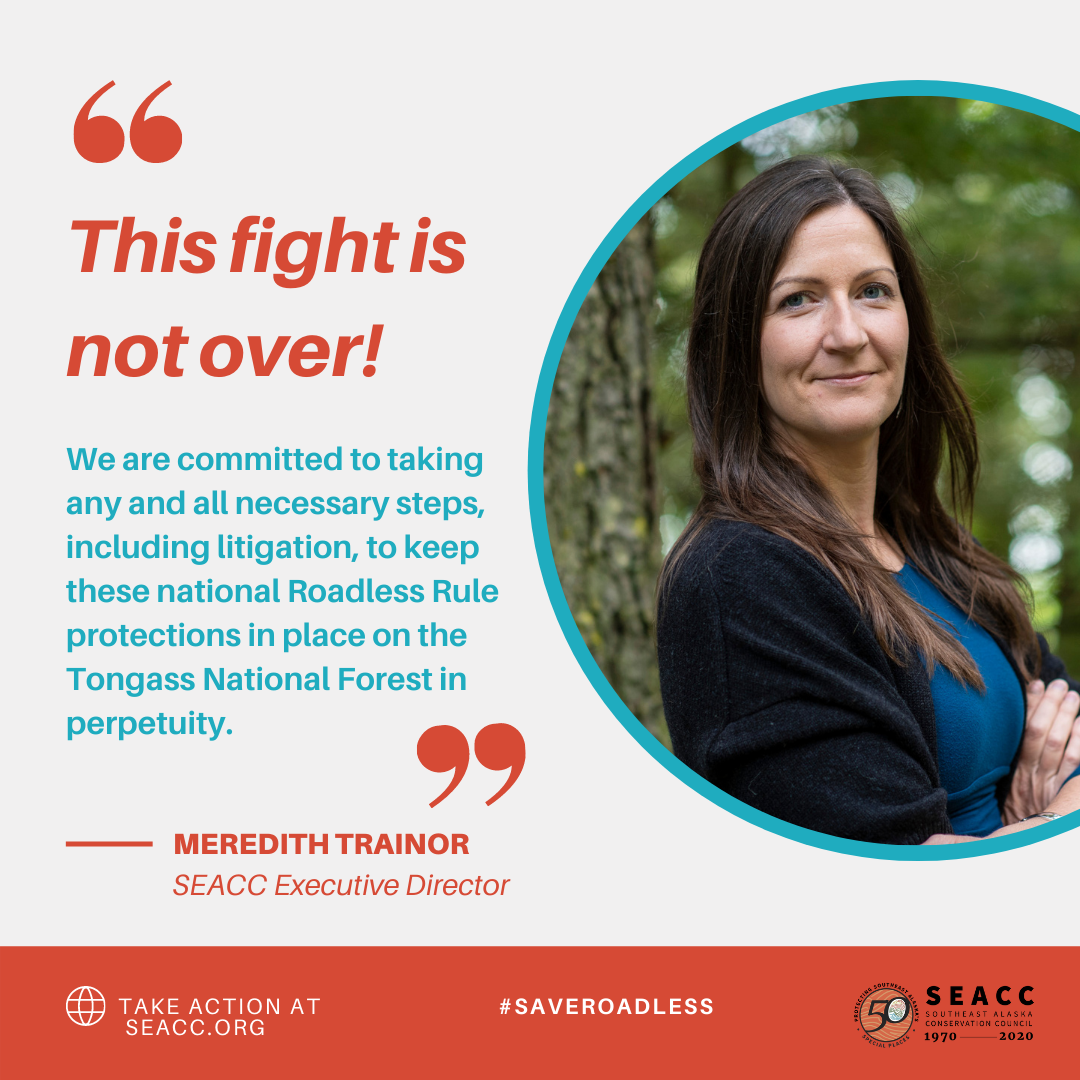 This decision, driven by partisan politics, prioritizes propping up a bygone timber industry and ignores public comments from Alaska Native Tribes, commercial fishermen, local tourism operators, and subsistence users who all rely on a healthy Tongass for income and/or food security.

Instead of being protected under the national Roadless Rule, vast swaths of irreplaceable old-growth temperate rainforest will now be open to clearcut logging and roadbuilding. These activities endanger critical salmon and deer habitat and put one of the nation’s most significant carbon sinks at risk. The decision will cost federal taxpayers money and negatively impact Southeast’s real regional economic drivers: tourism and fishing, responsible for 26% of the region’s jobs.

“The decision to rollback the Roadless Rule on the Tongass was made in spite of, not in support of, Southeast Alaskans and our communities,” Southeast Alaska Conservation Council Executive Director Meredith Trainor said. “In making this decision, the Trump Administration and the sham rulemaking process they undertook in our region ignored economic realities, environmental imperatives, and worst of all, the will of the people who actually live here.”

Roadless Rule protections are extremely popular nationwide and in Alaska, with 96% of public comments supporting keeping the Roadless Rule protections on the Tongass. Yet Alaska Gov. Mike Dunleavy and Alaska’s Congressional Delegation — U.S. Sens. Lisa Murkowski and Dan Sullivan, and Rep. Don Young— lobbied President Trump and pressured Secretary Perdue in an attempt to revive an ailing timber industry rather than listen to their constituents.

Over the past two years, there have been countless examples of favoritism toward the timber industry and party politics that ultimately influenced Secretary Perdue’s final decision. Here’s just a few examples:

Further evidence of political manipulation is found in the administration’s own documents. The U.S. Department of Agriculture’s Forest Service said in Appendix H of the Final Environmental Impact Statement: “Response 104: Development of federal policy is often inherently political. In this case, USDA gave substantial weight to the State’s policy preferences, which is within the discretion of the Secretary.”

Trainor said, “The Final Environmental Impact Statement itself makes clear that a full exemption for the Tongass was a foregone conclusion from the moment the State of Alaska made its request. While the Roadless Rulemaking process was a dead end for Southeast Alaskans, this fight is not over — we are committed to taking any and all necessary steps, including litigation, to keep these national Roadless Rule protections in place on the Tongass National Forest in perpetuity.”

About SEACC
Based in Juneau, Alaska (Tlingit / Áak’w Ḵwáan lands), Southeast Alaska Conservation Council (SEACC) is a regional grassroots organization with more than 6,000 supporters. For over 50 years, SEACC has been bringing together diverse Alaskans from our region’s communities to protect the natural resources of Southeast Alaska, ensure sound stewardship of the lands of the region, and protect subsistence resources and traditional ways of life side-by-side with commercial fishing, tourism and recreation.