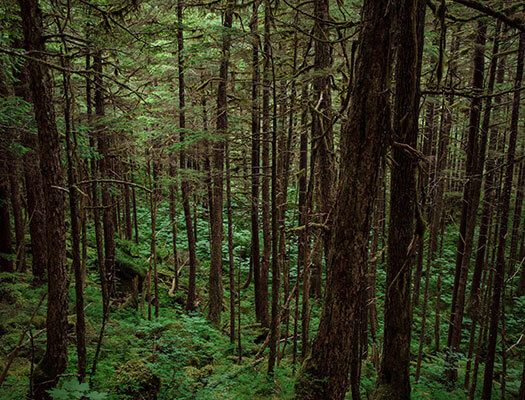 This past summer the Biden administration announced it would seek to reinstate the national Roadless Rule, restoring essential protections to the forest. At the time, the USDA also declared an end to industrial old-growth logging on the Tongass, other than in micro sales and for traditional Indigenous uses.

What’s more, during the July announcement, the USDA announced it would set up a team to consult with Tribal governments and Alaska Native corporations, working with regional rightsholders and stakeholders to determine where to allocate up to $25 million of funding, and highlighting examples of integrated sustainable economic development already underway in the region. This larger effort is referred to as the Southeast Alaska Sustainability Strategy (SASS).

The Biden administration’s announcement today marks a critical inflection point in the long history of the fight to protect the Tongass National Forest,” says Meredith Trainor, Executive Director of Southeast Alaska Conservation Council — who was recently featured on ABC News discussing the importance of the nation’s largest National Forest. “Beginning Tuesday, we need both Alaskans and Americans across the country to show up once more to speak out on behalf of our forest, and to once again submit comments supporting the restoration of the national Roadless Rule to the Tongass, so we can spend the next three years of the Biden administration doing the legwork to make these decisions real and lasting.”

Once the public process begins on Tuesday, supporters and members of the public can submit comments to the Forest Service through seacc.org/roadless-rule.