SEACC is objecting to the Kensington Mine expansion! 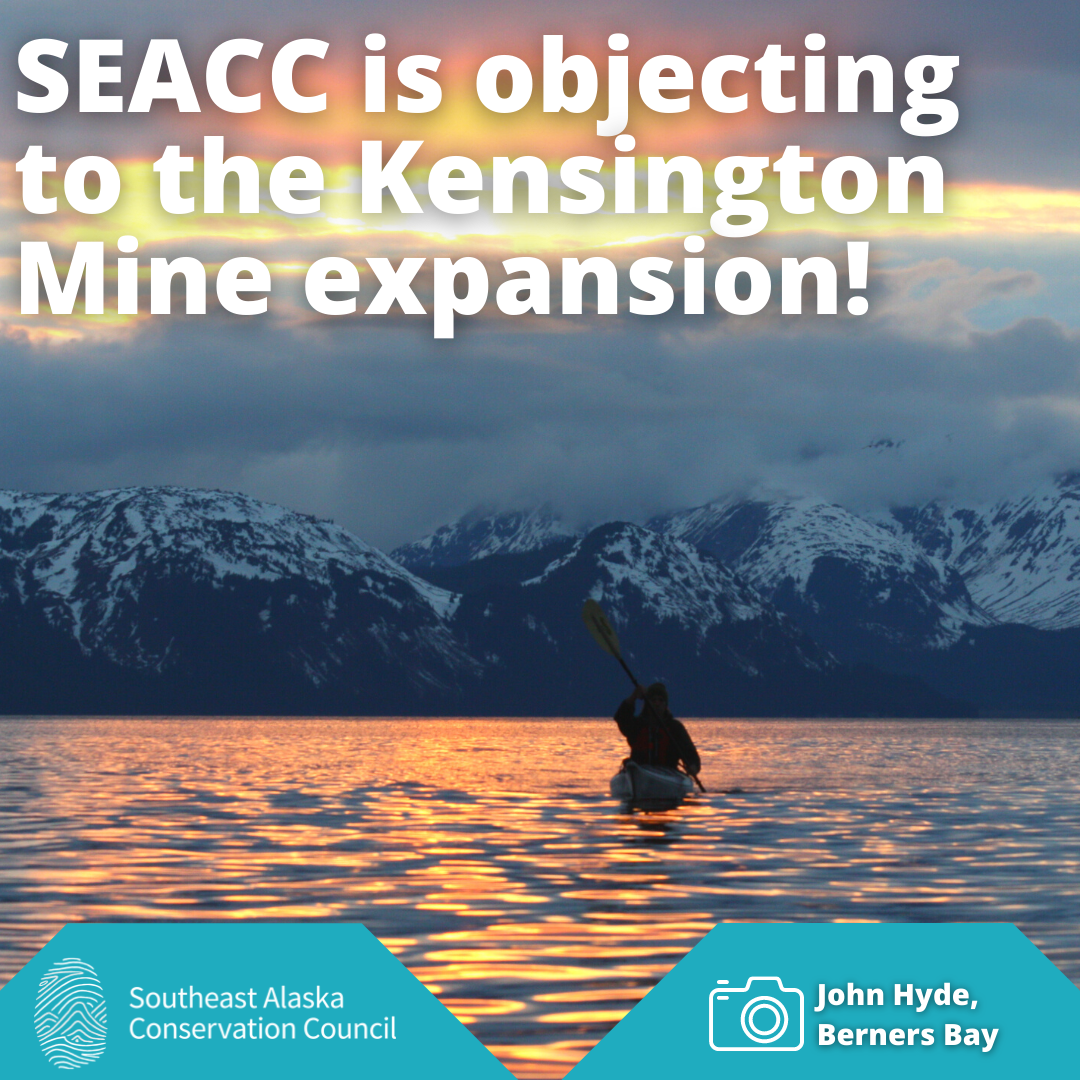 Kensington Gold Mine — located north of Juneau and across Berners Bay, just beyond the end of the road — is moving forward on its efforts to expand the dumping of mine waste into Alaskan waters overhanging the bay. The mine has already dumped over 4 million tons of mine tailings into Lower Slate Lake since it began operating in 2010.

Kensington is the only mine in the U.S. allowed to dump chemically processed mine waste into a natural lake, destroying fish habitat and the lake’s natural character. As a result of the construction of the tailings dam, there is now an acid rock drainage problem at the site.

Last year, Coeur Alaska — the mine’s owner and operator — applied to the U.S. Forest Service to raise the tailings dam it constructed at Lower Slate Lake and double the dumping there to hold another 4 million tons of mine waste. This additional mine waste would increase the potential damage if or when the dam fails.

According to the Kensington Final Supplemental Environmental Impact Statement (FSEIS), in the event of a dam failure, millions of tons of mine waste would devastate Slate Creek, Slate Cove, and reach well into Berners Bay. The dam would have to last forever to prevent this outcome.

Berners Bay is part of the traditional and unceded territory of the Auk Kwaan, whose leaders have called for the protection of its land and waters, and relied on the rich abundance of the bay for millennia. Berners Bay is also heavily used by Juneau residents and visitors for recreation, sport, and subsistence hunting and fishing, birdwatching, weekend outings, and simply as a place to get away from it all. Berners Bay provides spawning and rearing grounds for herring and hooligan, feeding opportunities for marine mammals and migratory birds, and intact and active habitat for mountain goats, brown bears, and moose.

The National Oceanic and Atmospheric Administration (NOAA), part of the U.S. Department of Commerce, has asked the USFS to consider alternatives other than raising the tailings dam according to a recent story by KTOO.

“When you raise the dam by 36 feet, and add another 4 million cubic yards of material, the chance of that dam failing increases,” NOAA Fisheries scientist Sean Eagan told KTOO. “And should it increase, the tailings will spill out more broadly into Berners Bay.” NOAA Fisheries’ concerns can be viewed here.

Here’s what SEACC has done.

Our comments shared important concerns about dam safety, climate change-related precipitation increases and flooding events, habitat degradation, the Forest Service’s failure to adequately monitor what is happening on the ground and to the waters at the mine site, and the SEIS’s failure to analyze a reasonably available alternative that would provide environmental advantages — the previously studied and approved dry stack tailings facility on the Lynn Canal side of the mine site, farther away from Berners Bay.

We were joined in voicing these and other concerns by hundreds of people who commented on the Draft SEIS asking the Forest Service to do a better job, and in particular, to take a hard look at the environmental preferability of the dry tailings approach!

Where the process is now.

The Forest Service recently issued a Draft Record of Decision allowing the mine to raise the size of the dam at Lower Slate Lake and dump millions of tons of tailings into the water. However, under NEPA, there is a 45-day period in which people and organizations who previously submitted scoping or DSEIS comments can submit an objection.

We think the Forest Service has done a disservice to the environment at Berners Bay and failed to meet the requirements of NEPA to both properly analyze reasonable alternatives and to properly account for and manage the mine’s negative effects to date.

Here’s what you can do.

If you made a public comment on the proposed Kensington Mine expansion and closure plan (DSEIS or Scoping) — then you are eligible to submit an objection of your own by Monday, August 23.

See the SEACC website for further instructions on how to submit a formal objection, and to learn more about Berners Bay and the proposed Kensington Mine expansion plan, visit this page. For help with the objection process, contact Aaron Brakel at [email protected] or call 907-586-6942.

Thank you for taking action to protect Berners Bay.

← Prev: How to Formally Object to the Kensington Mine Expansion Next: Why SEACC Is Canceling the Rescheduled 50ish Celebration →