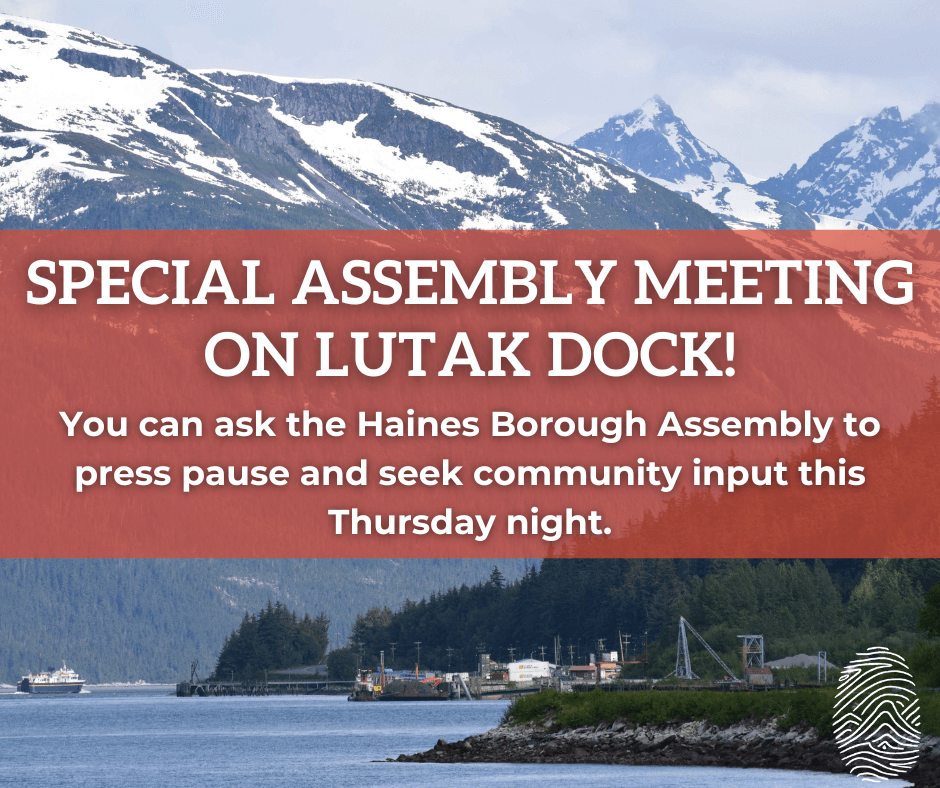 This is your opportunity to ask the Haines Borough Assembly to slow down and involve the community in their plans for Haines’ future. Click here for meeting information.

Many of you submitted public comments to the Assembly last week when this resolution was originally scheduled for a vote. Thank you to all who have spoken up. That resolution was rescheduled for a special meeting this Thursday, September 22, at 6:30 p.m. over Zoom and in Assembly Chambers. Now you have another chance to weigh in.

Our community has been actively asking for transparency and public meetings on Lutak Dock since September 2020. Since, then, the project has changed many times, from funding sources to design, but our requests for transparency, public meetings, and a slower pace that allows for community involvement have remained consistent. Instead, the Borough has continued to move forward at a pace that fails to address community concerns.

Back on April 12 of this year, the Assembly voted to move forward with permitting for Phases 1-3, despite overwhelming public comment against Phase 3. Borough officials repeatedly assured us that Phase 3 was “not about ore.” Recordings from the March 24 Ports and Harbors Committee Meeting with Yukon mining industry representatives demonstrate otherwise.

The latest approach to Lutak Dock development is a “progressive design build,” that separates out development into incremental stages, meaning the Borough could enter into design and construction without ever presenting the community with its vision for a final product. What happened to the public meetings we were promised in the spring? Our community has demonstrated an eagerness to participate in the visioning and planning processes for the future of our port. Why is the Borough racing ahead to approve a contract with Turnagain Marine without delivering on the public meetings we requested?

You can ask the Borough Assembly to slow down, involve the public, and take no action on Resolution 22-09-996 by submitting your written comments to [email protected], and asking her to forward them to the Assembly and Mayor, or testify in person or over zoom this Thursday night at 6:30 p.m.

Thank you for speaking up for our community and for Lutak Inlet.