Summary of the Draft Tongass Plan 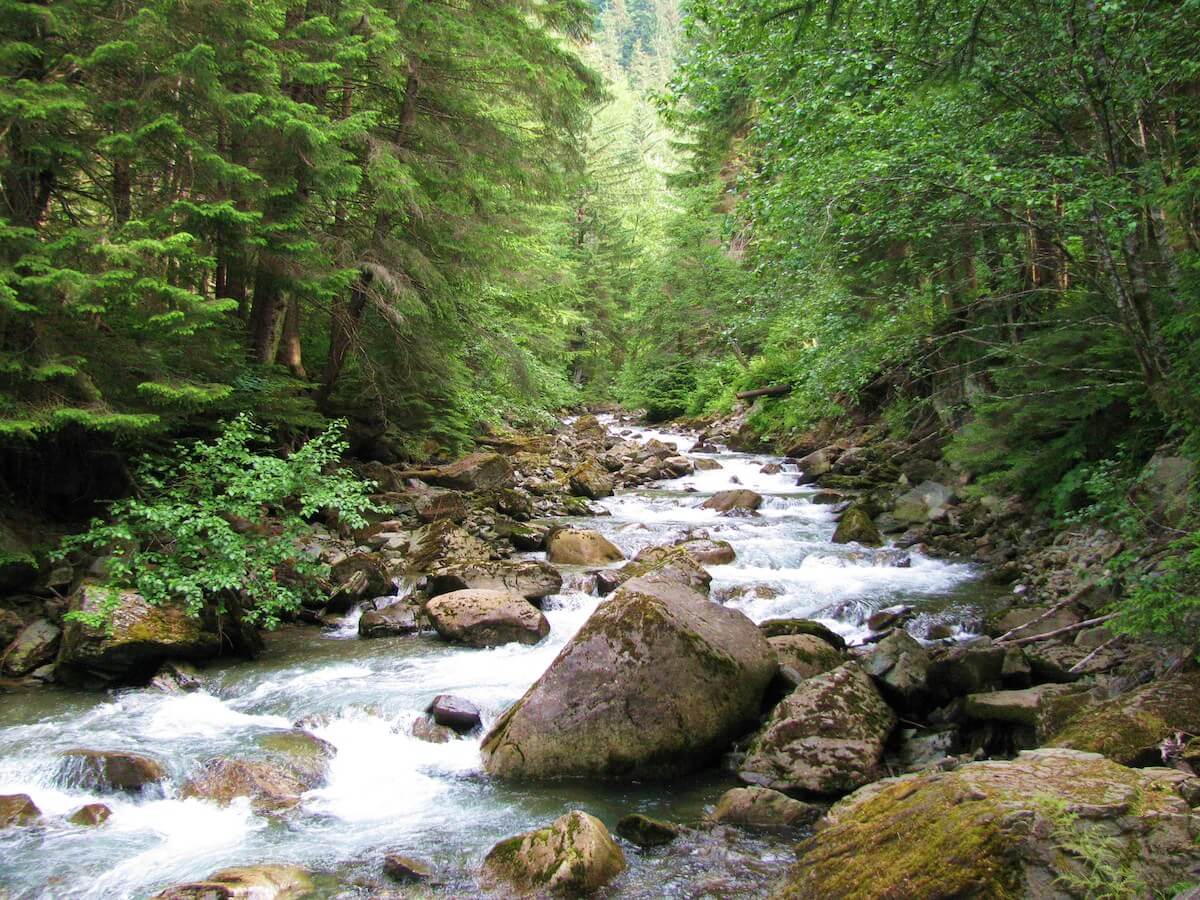 In November of 2015 the U.S. Forest Service released a Draft Environmental Impact Statement (DEIS) and preferred alternative for public review on its proposed Tongass Land Management Plan amendment. Public comments are due by February 22, 2016.

However, the proposed plan continues controversial clearcutting of valuable old-growth forests over the next 15 years! In fact the Forest Service plans to log more old growth in the next decade s than they did in the last decade. The Tongass National Forest is the only National Forest in America that still allows clearcut logging of irreplaceable old-growth forests. What’s worse is that purchasers can export up to half of those logs without local processing, effectively sending local manufacturing jobs out of the region.

Several years ago the Forest Service hand-selected a small group of people known as the Tongass Advisory Committee or TAC to help guide development of the plan. The group did not include any wildlife biologists or other scientists.

We can’t wait another 15 years for the Forest Service to end the conflict and controversy surrounding old growth logging. Instead of throwing millions of tax dollars a year on large timber sales designed for export, the Forest Service should shift its priorities now so that it can meet the needs of all Southeast Alaskans, not just the timber industry. The priority for Tongass management should be the maintenance and enhancement of the salmon and tourism sectors, the thriving sectors of our economy. Such forward-looking action could achieve the promise of true reform of true Tongass management.

Weigh-in with the Forest Service on the future of the Tongass.

Southeast Alaskans want a Tongass Forest plan that works for all, not just the timber industry. Despite announcing a rapid transition from old-growth logging on the Tongass more than five years ago, the USFS’s preferred alternative drags out industrial scale clearcut logging of old growth for 15 more years.

It’s high time to chart a newt course for the future of the Tongass, our biggest, wettest, and wildest National Forest. Instead of throwing millions of tax dollars every year for the next 15 years at large timber sales designed for export, the Forest Service should shift its priorities now to best meet the needs of all Southeast Alaska communities. Forest management should focus on enhancing the salmon and tourism sectors of our economy and keeping our planet a bit cooler by continuing to store large-volumes of carbon in ancient forest stands.

The proposed plan calls for continuing controversial clearcutting of valuable old-growth forests on the Tongass over the next 15 years — far too long:

The current Tongass timber industry is no longer one of Southeast Alaska’s economic engines but a magnet for wasteful taxpayer spending.

Southeast Conference reported that the Tongass timber industry generated total earnings of roughly $17 million [≈ Most expensive car ever sold, Ferrari] in 2013 and 2014. The numbers show that Southeast Alaskan artists earned nearly twice as much as timber in 2013. The $17 million [≈ Most expensive car ever sold, Ferrari] annually generated by timber is less than 1% of the combined $2 billion [≈ Average total annual tax break to the five biggest oil companies] generated in the region by fishing and tourism.
The public is paying $20 million [≈ Annual hurricane research funding in 2011] annually to subsidize the Tongass timber program. The New York Times reported that Tongass subsidies amount to $130,000 per Tongass timber job.

Given the amount of intact old-growth forest remaining on the Tongass, as well as our cool and wet climate, the Tongass is America’s carbon storage champion. Climate scientists have found that the Tongass stores ten times more carbon than the next largest National Forest. Despite the critical role of the Tongass as the Earth’s carbon life-raft, the Forest Service proposes to increase clearcut logging of Tongass old-growth forests. Worse, instead of taking a hard look at the tradeoffs between the rate and amount of old growth logging in the action alternatives, the Forest Service preferred alternative calls for logging even more old-growth in the next ten years than we did in the last ten years.

Clearcutting old growth forest and replacing it with young growth releases more than 50 percent of the carbon into the atmosphere. Even with sequestration of carbon dioxide in new growth, plus stored carbon in wood products, this results in a huge net loss of carbon. The Forest Service needs to calculate the economic value of the Tongass’ net carbon mitigation contribution and compare that value to the revenue generated from logging old growth. Such a calculation will undoubtedly show that old-growth is much more valuable for carbon storage than timber production.

I support the Forest Service’s choice not to schedule logging in key areas of long importance to Southeast Alaskans, places like East Kuiu, Port Houghton, Castle River, Cleveland Peninsula, Ushk Bay, Bostwick Inlet (on Gravina.) I was surprised, however, that the Forest Service didn’t change the Land Use Designation (LUD) for these key lands from development to natural LUDs. What regulation or plan component prevents the Forest Service from later proposing a project-level amendment to the Forest Plan that schedules logging of other old-growth acres in these development LUDs? If these old-growth acres are off limits to timber production then put these lands into LUDs that specifically preclude logging, like the Remote Recreation, Semi-Remote Recreation, and Special Interest Area LUDs.

Who are you fooling?

The Forest Service claims it’s making a “transition” away from logging old growth but that its goal won’t be met for over 15 years. The agency’s preferred alternative looks like 15 more years of “business as usual” old-growth logging – Alternative 5 calls for logging even more old growth in the next 10 years (460 mmbf) than was logged over the last ten years (390 mmbf). Worse, the Secretary of Agriculture set an unachievable objective for the transition of preserving a “viable” timber industry on the Tongass.

Don’t forget, according to the US Forest Service’s own State of the Tongass reports from 2009 -2013, American taxpayers get a return of six cents back for every dollar spent propping up the Tongass timber “industry.” What we all need to consider is how to de-couple Southeast Alaska’s local wood industry from an insatiable and unsustainable corporate export model that is dragging everyone down with it as it goes. Anyone who’s owned a business knows you can’t operate a business at a loss year after year and still call it viable.

Although the Forest Service involved citizens in developing recommendations for the Tongass Plan, it restricted the Tongass Advisory Committee’s (TAC) focus narrowly on the needs of the timber industry – not the growing tourism, recreation, or fishing industries. The TAC recommended weakening key elements of the forest-wide Habitat Conservation Strategy without consulting any wildlife experts. Consequently, TAC recommendations to treat all young growth timber as suitable for timber production within Old-Growth Reserves and the 1,000 foot no-cut beach and estuary buffer are uninformed and inconsistent with the best available science. It is appropriate to log young growth forests in reserves and buffers only if treatments are shown to benefit wildlife by accelerating the development of old-growth forest characteristics.

What is the Tongass Land Management Plan?

The National Forest Management Act—passed in 1976—requires every National Forest to involve the public in the development and regular revision of local forest plans. The plan guides all future natural resource management activities on the forest and allocates different lands for different uses consistent with the principles of the Multiple-Use Sustained-Yield Act and other federal laws, including the Tongass Timber Reform Law. The 1979 Tongass Plan was the first forest plan prepared in the U.S.A. and was revised in 1997. That plan lasted until 2005 when it was declared unlawful because the agency’s use of exaggerated market demand projections “fatally infected” the plan. In response, the Forest Service amended the plan in 2008. The draft plan currently out for public review proposes to amend the 2008 plan.

Why is the Forest Service amending the Tongass Land Management Plan?

This amendment responds to a request from USDA Secretary Tom Vilsack that the Forest Service consider amending the Tongass Plan to speed up the transition away from large scale old-growth logging towards a timber program that utilizes mostly second growth – or young growth – forests over the next 10-15 years, or sooner.

Why did the Forest Service come out with this DEIS and “preferred alternative” to the plan?
All national forest planning must involve the public and comply with the National Environmental Policy Act (NEPA). Alternative 5, the agency’s “preferred alternative,” is based on recommendations from the Tongass Advisory Committee.

What would change from what is happening now in the Tongass? What wouldn’t change?

In short, very little. The plan proposed by the Forest Service actually schedules more old growth logging in the next 10 years then was cut over the last decade.

← Prev: 25th Anniversary of the Tongass Timber Reform Act Next: Thank you for speaking up for the Tongass →