SEACC and Partners – Taking the BLM to court to protect the Chilkat!

Today SEACC, along with an Alaska Native Tribal Government and two other conservation groups, filed a lawsuit against the Bureau of Land Management (BLM). The suit challenges BLM’s failure to consider the cumulative impact of future mine development at Constantine Metals’ Palmer Project when reviewing exploration applications. The Palmer Project encompasses ongoing exploration activities in the Chilkat Watershed, directly upstream of Haines and Klukwan, AK.

An eagle on the Chilkat - Photo by: Josh Miller

The Chilkat River – “Jilkaat Heeni” in the Tlingit language, meaning “salmon storehouse” – runs from its headwaters in the Coast Mountains of British Columbia, Canada, into the sea near Haines. All five species of Pacific salmon, along with anadromous eulachon and trout, thrive in these rivers and have provided the Chilkat Tlingit people with sustenance for thousands of years. The river remains a cultural and economic mainstay for the region today.

This is a uniquely beautiful region with steep, rocky mountains towering over the wild Chilkat River. It abounds in wildlife including moose, black and brown bears, and bald eagles. The unique geology of the river means that it stays ice-free longer than other water bodies. Thousands of bald eagles descend on the valley each year to feast on the exposed salmon, an event not seen anywhere else in the world.

Constantine Metals, a Canadian company, is exploring for copper, zinc, gold, and silver in the mountains above the river. Should they find sufficient reserves of these elements, the next step would be to plan for full-scale mine development. Located in a massive sulfide ore body, the mine would be acid-generating, threatening the downstream communities and wildlife that rely on the clean water, food, livelihoods, cultural traditions, and habitat provided by the Chilkat River. 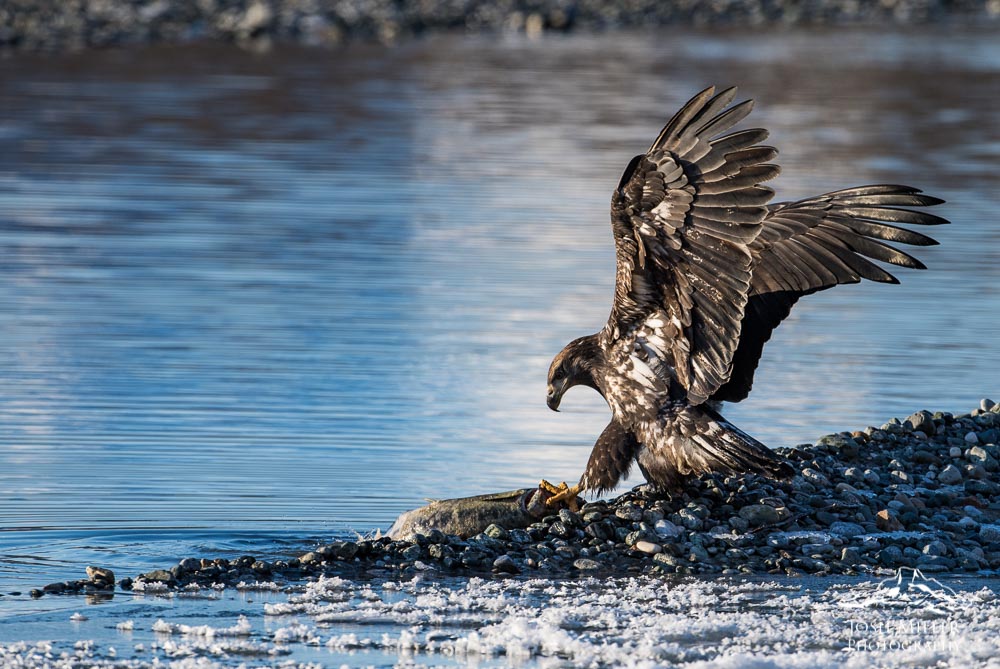 An eagle feasting on salmon from the Chilkat Photo by: Josh Miller

The BLM is responsible for the oversight of the project but has failed in that role. Under the United States’ bedrock environmental laws, the BLM must consider the cumulative impacts of its incremental decision making in advancing this mining project. Despite this requirement, they have already issued two decisions permitting exploration of the area without considering the connected and cumulative impacts from future mine development and its potentially disastrous consequences on the watershed. Exploration is the first step in developing a new mine.

Mines in massive sulfide ore bodies have a poor track record of protecting water quality. This potential mine could devastate the river and all those who rely on it. From the food gathered in the river that sustains local communities and the livelihoods of commercial fishermen to the wildlife that relies on a healthy environment, this is a unique and critical area to protect. By permitting projects piecemeal instead of undertaking a comprehensive evaluation of all potential impacts, the BLM is effectively ignoring its responsibility to conduct a thorough assessment at one of the key points in the approval process where they still have the authority to influence and shape the outcome.

The Chilkat is a unique area in this region and the world. Protecting it at this time is critical, and we believe this lawsuit is the best tool available to ensure that the Chilkat Valley continues to thrive.