A few days into my third trip, we make our way to Sawyer Glacier (North Sawyer to some) to find out how far the glacier had receded since last summer. The steep fjord walls, tightly grained with metamorphic pressure, twist the waterway. The ice flotsam runs in threaded lines through the water, following the freshwater outflow running against us. There, around the last curve, Sawyer looms. Towering seracs rise out of a mess of pulverized ice on its surface. Terns buzz around the face, waiting for the next thunderous calving to stun fish. We paddle closer. Chrissy, ever the expert, picks out the newly exposed rock around the sides. She traces the meandering of the lateral moraines and picked out the spots where ice would no longer flow down to feed the front. Not long, she guesses, before Sawyer would drop out of the ranks of the tidewater glaciers if it wasn’t already pulling its feet out of the sea. 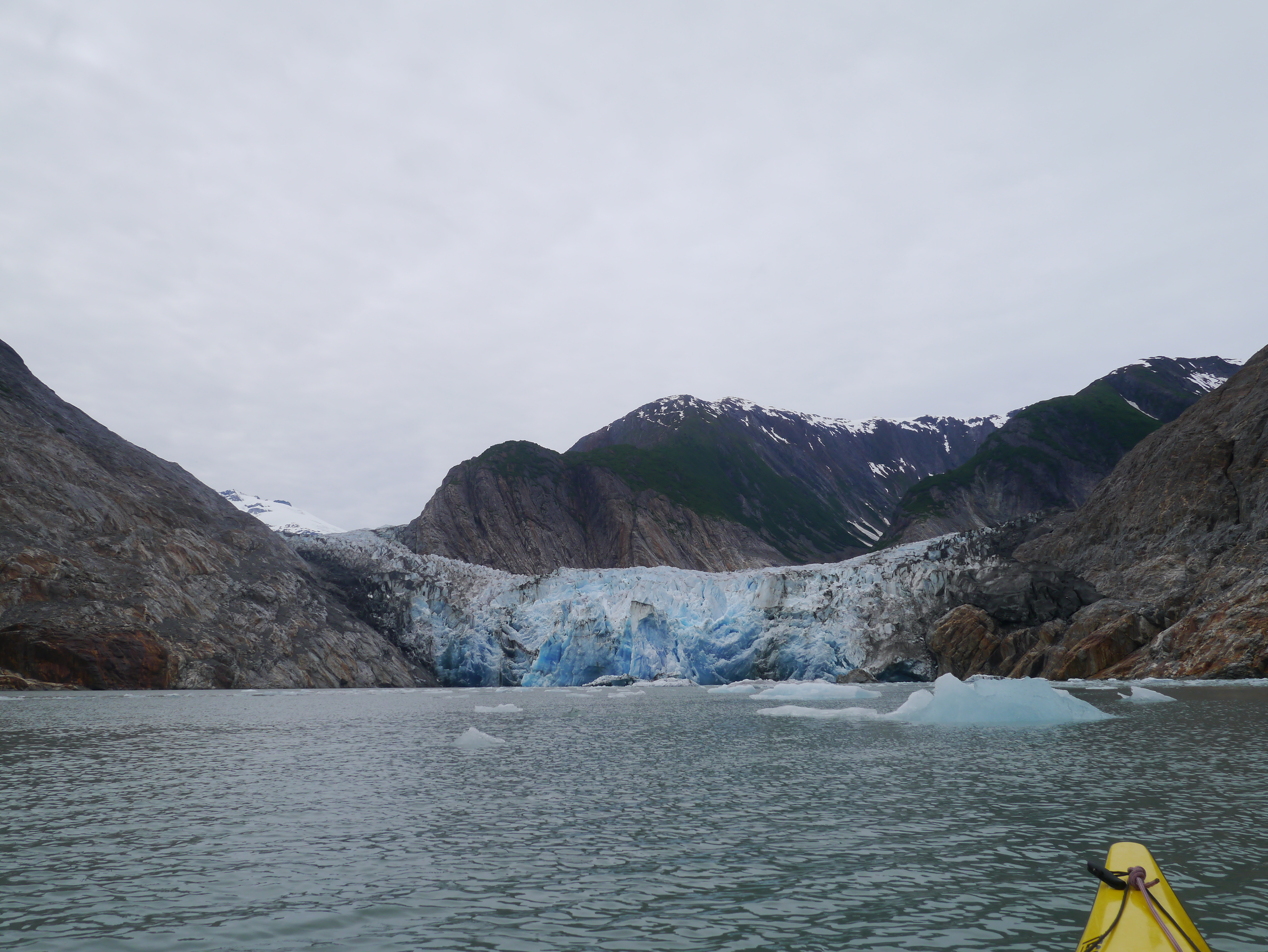 Sawyer Glacier. The ice is peeling off of the rock faces, up and out of the water.

We get so used to seeing nature as a static value. Timeless. The mountains stay standing. The sea always comes back in. Glaciers challenge that. They register on a scale we’re used to seeing as beyond our flash-in-the-pan lives, yet, they do move! Miles of ice groans and shifts. It tumbles and thunders.  Fresh-faced transplants from the lower forty-eight, within a couple scant years in Southeast, begin repeating that sourdough phrase, “The glacier used to be bigger.”

Tracy Arm’s glaciers are the southernmost tidewater glaciers in the northern hemisphere. They melt and move much faster than land-bound glaciers, and the salty seawater encourages calving at a prodigious pace. If it wasn’t for an equally stupendous snowfall year after year, they would disappear in a relative flash.

We bob among the brash and bergy bits, staring up at a huge, forked prow of blue ice in the middle of Sawyer’s face. Bits of ice tumble into the water every five minutes, grains compared to the whole mass, but still booming like timpani as they smack into the sea. “Looks like it’s going to fall,” I say, looking at the front. Just the suggestion glues us in place. What if? More tiny pieces rumble off. Minivan size chunks, refrigerator chunks. 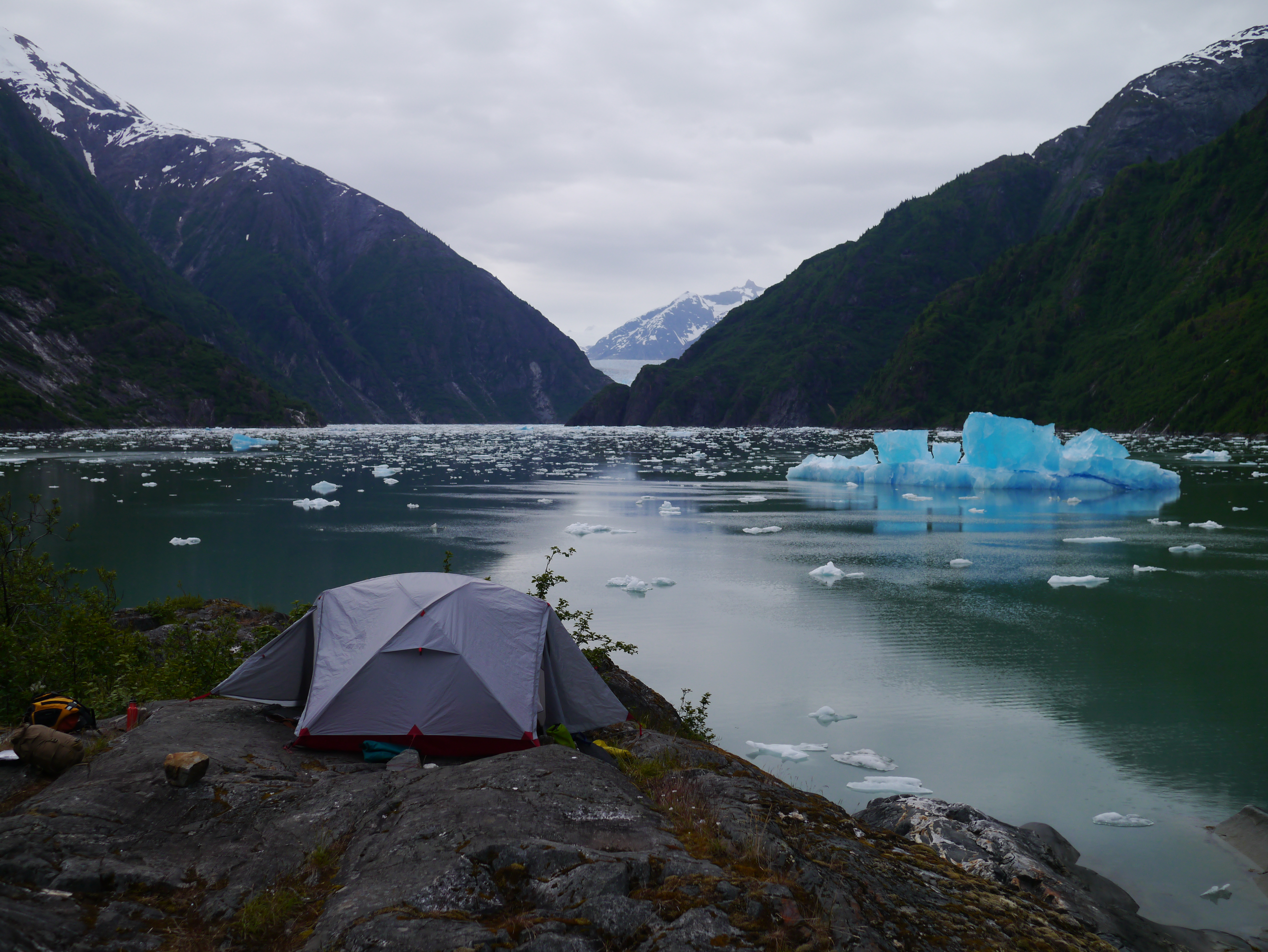 Taking refuge on Sawyer Island, we were audience to a colossal berg with house sized, cubical riders traveling down from South Sawyer Glacier.

Then, there’s something different.  These tiny sluices of ice coalesce, form an outline around the very tower we had picked, and it happens. The tower’s front comes off in one solid, two hundred foot tall mass. The hairs on the back of my neck prick up before the sound comes, thunder that rises and swells, enveloping us.

As the serac’s slab descends, it shoves the sea towards us, a swell that would be at home in the open ocean rolls, lifts us. That wasn’t so bad I think before the swells begin reflecting off the narrow fjord walls.

The glaciers of Tracy Arm-Fords Terror have gone over the tipping point, climatically speaking. The Stikine Icefield that feeds these glaciers has suffered more heat than ever before, causing it to lose the mass it needs to build up snow from year to year. And down at our end, the glaciers that rely on it are moving fast with the help of deep seawater exits, pulling ice from the icefield faster than ever. The spectacular, terrifying shows of calving are symptoms of a dying glacier, moving too fast even as the flow of new material dies down. Sawyer was over thirty miles longer at the end of the last ice age. When the noted glacier fanatic John Muir described it in , Sawyer and South Sawyer glaciers were still one. In 1890 the glaciers finally split. In 2015, South Sawyer retreated a mile from its current spot. The history of this retreat is exponential; each coming year is completely new territory for us to uncover.

As we paddle out of the fjord, we’re accompanied by massive icebergs sailing like ships. The glaciers ride out with us, piece by piece.