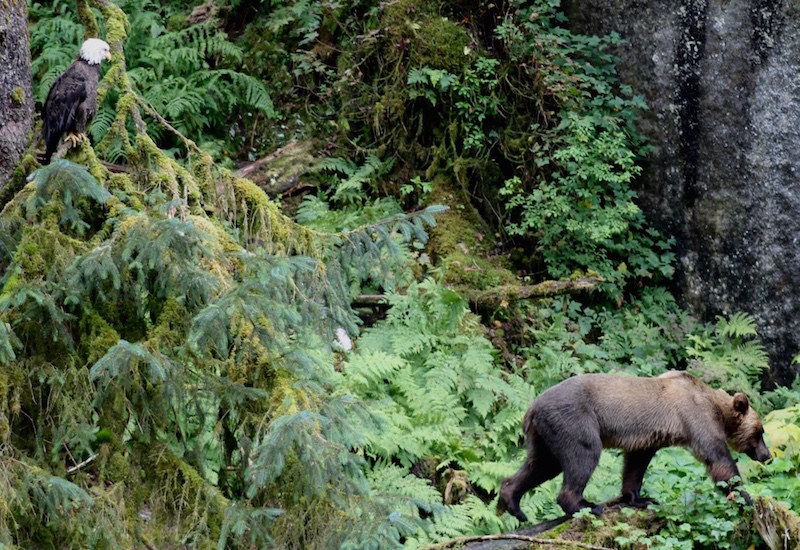 The Tongass is the still-thumping heart of a rainforest that once stretched uninterrupted from Northern California through Oregon, Washington, British Columbia and Alaska. The Tongass contains nearly one-third of the old-growth temperate rainforest remaining in the world, as well as the largest tracts of old-growth forest left in the United States. Old-growth temperate rainforests hold more biomass (living stuff) per acre than any other type of ecosystem on the planet, including tropical jungles. The Tongass alone holds 8 percent of all carbon stored in U.S. national forests and is recognized as a globally significant carbon storage reserve.

Despite the scenic grandeur of the Inside Passage, multiple uses – including logging - are allowed on National Forest lands. In fact, the Tongass is the last National Forest to allow large-scale clear cut logging of ancient old-growth trees, and according to draft plan released this year, will continue to permit this outdated practice for another 15 years. In 2015 over 6,000 acres were logged as part of the Big Thorne sale on Prince of Wales Island.

To make matters worse, this is done at a loss to the US taxpayer. One study by Headwaters Economics estimated that taxpayers subsidize the Tongass timber program to the tune of $20 million per year, or about $130,000 per timber job.

Despite all the tax dollars spent propping up the industry, the timber industry currently contributes less than 1 percent to the local economy.

What you can do:

Sign-up to stay informed - we’ll let you know about the next opportunity to speak up for the Tongass. It is always helpful to drop a line to your U.S. Senators and Representatives telling them that you live, work, and play in the Tongass and would like it to be managed for fish, wildlife, and fun; the American public should no longer be subsidizing old-growth clearcutting.