In 2017, Alaska and the nation face an onslaught of new legislation from a Congress seeking to promote short-term economic gain for a few at the expense of the larger public good.

A bill of particular concern is H.R. 232, the State National Forest Management Act of 2017, introduced by Alaska Congressman Don Young. H.R. 232 would allow states to acquire up to 2 million acres of National Forest System lands, including all roads, campgrounds, and public-use cabins - including from the Tongass.

As a national forest, the Tongass is managed for multiple uses such as hunting, fishing, hiking, and timber production. H.R. 232 requires states to manage the acquired lands “primarily for timber production.” This means that these lands will be prioritized for logging, not for multiple-use, as with federally managed lands. The Alaska State Forest Practices Act does not limit the size of clearcuts or provide enforceable wildlife habitat protection measures on state forest lands.

In 2012, the Alaska Timber Jobs Task Force identified a preliminary list of possible state forest selections from the Tongass National Forest for clearcutting. This was done without public involvement and allowed the industry to target the largest, most profitable areas for logging.

The map below shows all of the land within the Tongass National Forest on the chopping block, including those designated as roadless and/or wildlands (known as Land Use Designation(LUD) II areas). 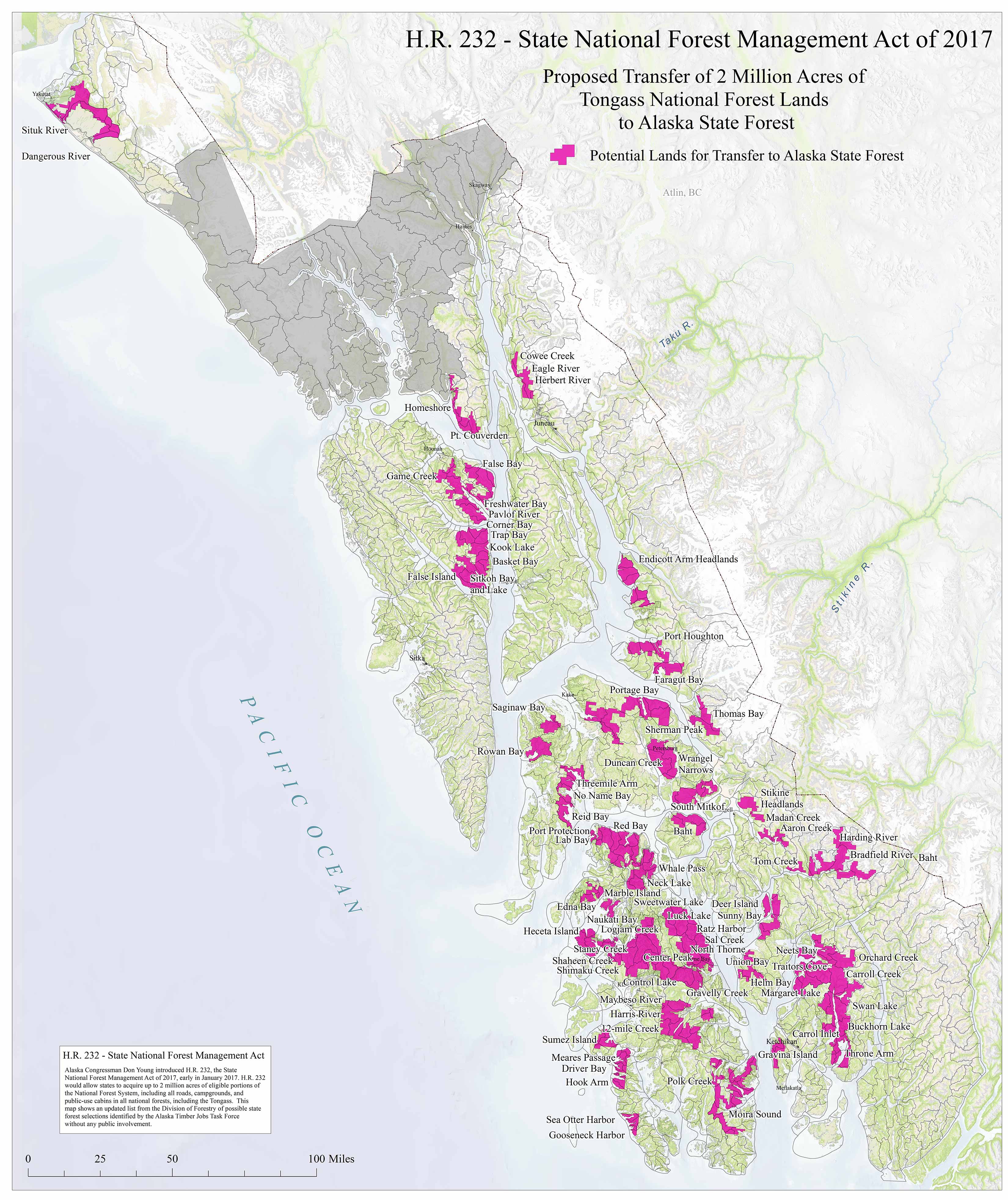 Many of the places of particular concern are areas where you hunt, fish, hike, paddle, watch wildlife, and make a living. They include community treasures of tremendous ecological importance like:

This possible shift to a timber-first focus will cost the State of Alaska millions of dollars annually and will harm the primary economic drivers in this region - fishing and tourism. So too will it endanger our rural schools. Every year the state of Alaska receives millions of dollars from the federal government under the Secure Rural Schools Act. Young's bill would reduce National Forest land surrounding communities and thus reduce funding for SE Alaskan schools, roads, and recreation projects.

In 2014, the Division of Forestry reported that the state timber program lost $9 for every dollar spent. In this era of $3 billion state deficits, Alaska needs to invest in education, public safety, and other critical state programs - not a money-losing timber program.

With all that is going on in Washington, from repealing established laws and regulations to newly proposed bills, it can be hard to keep track and understand the implications of proposed legislation. We want to help! Check out our Attacks on the Tongass page to find up-to-date information on what is happening in DC and how it could impact our forests, lands, and water here in Southeast Alaska.