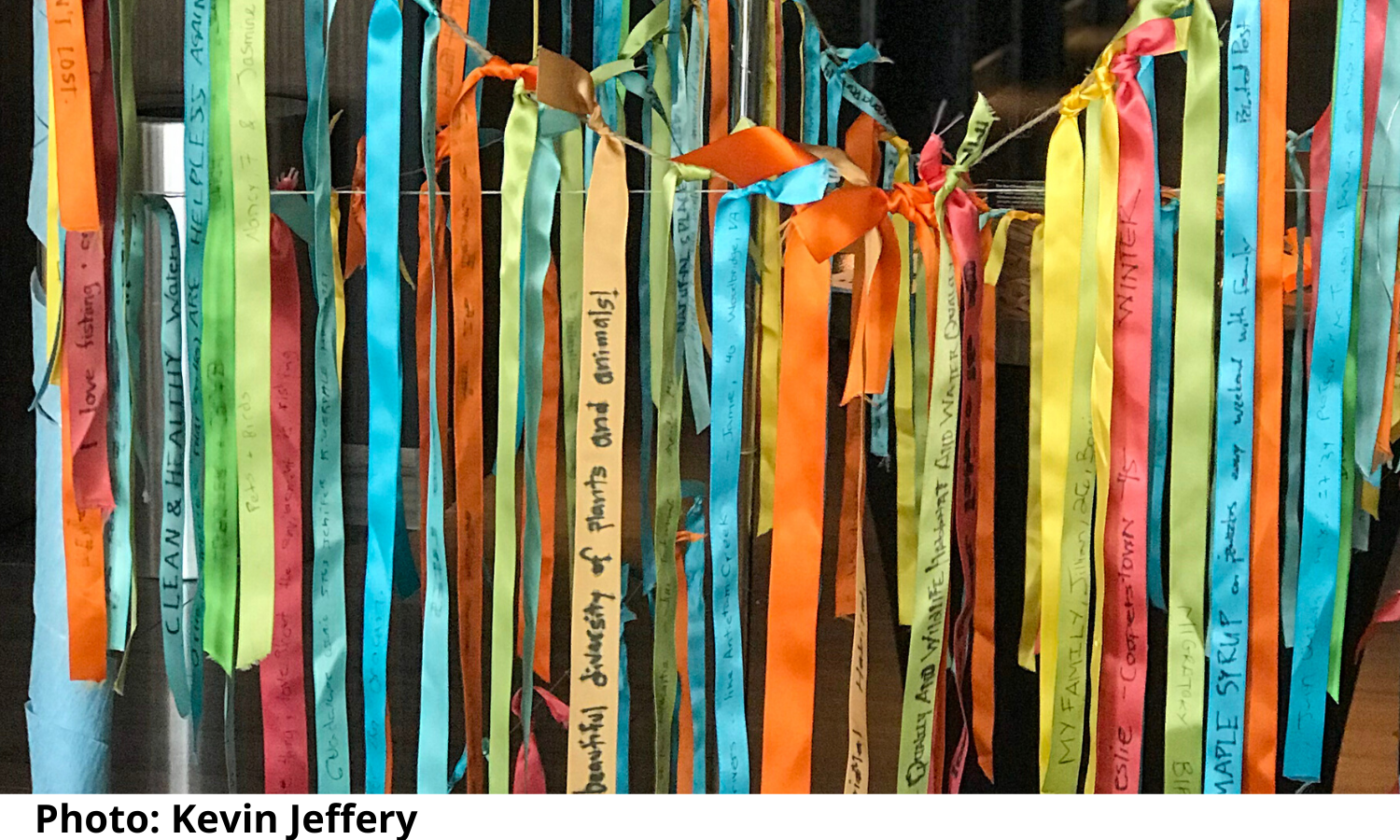 We’re trying something new! Once a month, we’ll be sharing three things that are catching our attention on water-related topics throughout Southeast Alaska and beyond, highlighting policies (What are we following?), actions (What are we doing?), and people or groups that inspire us (What are we learning?). We hope you enjoy our new series, Water Currents. We’d appreciate hearing your feedback and ideas for topics you’d like us to cover.

Art that Draws Connections: Titled Sound and Silence, the upcoming issue of Alaska Women Speak includes two pieces that draw connections between human vulnerability and that of the earth. The companion pieces come from Katie Craney (artist, advocate for the Chilkat Watershed, and SEACC Board member) and Janine Allen (Haines resident and longtime advocate for the Chilkat Watershed). Janine is hearing impaired and learned that her hearing aid batteries are composed primarily from zinc, one of the four minerals being explored by the Constantine-Palmer mining project upstream of the Chilkat Valley and towns of Klukwan and Haines. In her piece, she reflects on her hearing loss and the controversial mine, drawing connections between her ear canal and the mining adit or tunnel. Katie’s companion visual art piece incorporates Janine’s hearing aid batteries, beach trash, construction waste, found slide film and bullet shell casings, Icelandic sheep’s wool, fish leather, images from a Bering Sea beach and wax, all on hand-cut scrap metal.

Art that Increases Participation: We have long recognized the power and importance of art as an avenue to participation and storytelling. Within Southeast Alaska, SEACC has recently brought the Climate Ribbon Project (a global effort that asks what you love and are afraid to lose due to climate chaos) to community events across the region.

We have also launched Water Stories, a video project that asks participants to tell their Southeast Alaskan water story and share it on social media, and we will begin hosting Art Builds, in which we work with community members in towns across the region to create powerful visuals to amplify messages of local concerns, stories, and actions.

In June, SEACC staff continued the water and art conversation outside of Southeast Alaska by presenting on the topic at a national water conference called River Rally in Cleveland, OH. There, we teamed up with two other presenters from other parts of the country to present on water, art, and social justice, specifically highlighting the ways we’ve incorporated art in the Chilkat Watershed to raise awareness of environmental concerns, heal community divisions, and organize around impacts of mining upstream. We also brought a number of participatory art projects, including the Climate Ribbon Project, to open the conversation to new voices, to increase participation outside the traditional conference structure, and to broaden the perspectives represented.

Art Can’t be Silenced: Storyteller and activist, Sarain Fox, explains the important role art played in immortalizing the protests at Standing Rock and the #NoDAPL movement in this powerful interview.

Fox “sat down with a lot of creators and they explained that art is just as important as bodies on the front line. The way they explained it is so beautiful and simple: The media will always try and silence Indigenous people. They will always try and silence the voice amplifying injustice. But when you control the messaging and when you can put art on the front line, no matter what angle they take photos from, no matter who the media outlet is, the only photo they can publish is one that has the art in it, and the art contains the messaging. You can’t be silenced as long as art is part of the movement.”

Art, like water, breaks through barriers, crossing the typical lines that divide us — differences in language, education, socioeconomic status, location, and identity.

Examples of how powerful, strategic, and effective art can be as a tool for water activism and storytelling are all around us. Whether the art is made by community members or trained professionals, we have seen it boost participation, elevate conversation, and lead to endless possibilities that add beauty and creativity to a movement or a campaign.

Even more importantly, art allows everyone to participate in reshaping the idea of what’s possible and gives agency to each of us in turning that idea into reality.

As we take a cue from the many artists and activists that came before us and continue to inspire us, we encourage you to do the same. Together, we can nurture and grow the number of creative approaches into activism and storytelling, furthering the call for water protection, water rights, and water justice.

← Prev: Forest Currents: Youth In Action Next: The Next 50 Years of SEACC →